A Poor Church for the Poor

I have to admit, I was moved today when I read that Pope Francis had announced that he'd be spending his summer in Rome rather than at the papal villa, Castel Gandolfo. This is certainly not because I have anything against taking a holiday or making use of a villa. But, in a country where 1 out of 2 Italians are unable to take a vacation this year, I believe his actions are significant. 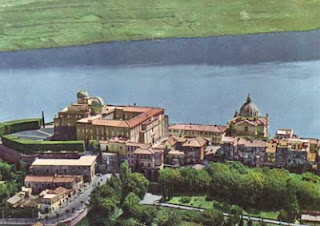 I'm the first to admit that as a part of the clergy, it is easy to succumb to a "I deserve" mentality. "I deserve" to have a nice glass of wine sometimes because of everything that I've given up as a part of my vocation. "I deserve" to have a summer holiday at a nice villa because I work hard during the year. What is problematic with the line "I deserve" is that it's centered on the wrong person. When "I" am at the center of anything rather than the God revealed in and through Jesus Christ, things tend to totally off-balance. In many ways, I believe the Holy Father is reminding us of the importance of being mindful of the one who is our true center, friendship with whom is the only sure bearer of peace and joy.

Over the last few months, I have prayed for an increasing spirit of simplicity in my own life. It's not always easy. I write this at 10:30 pm in the evening, knowing full well that in a few hours I have to catch a flight to Austin, Texas, to play another feis (Irish dancing competition). I'll be treated very well at the event - far better than I deserve, to be sure - but I hope at the least to maintain a sense of great gratitude for being able to use my talents for the benefit of others.

The image of a "poor Church for the poor" excites me because, in our world, it is the poor who are most easily reviled and rejected. A "poor" Church recognizes its limitations, it humbly accepts its sinfulness and shortcomings. It knows that no amount of gold or gilding, incense or chanting, can cover up the fundamental truth of our existence: we are, all of us, in need of a savior. The poor Church for the  poor is the Church of the poor, those who realize that regardless of what they own, or do not own, we can lay no claim on God's grace. The freedom and joy we find in friendship with Jesus Christ is wealth enough, a treasure we feel a desire to share with those around us.

In his simplicity, in his public willingness to break with "custom," I think Pope Francis gives all of us a model of Christian courage. We are, all of us, called to be defined by who we are for rather than what we own or what we have done. The Holy Father, in moving toward an increasing simplicity in his witness, can give us the courage to reassess our own lives: what, or who, defines us? Can we find joy in simplicity, in our poverty of spirit?