It often happens that I'll be taking a walk, or getting ready for bed, when suddenly I'm struck with the realization that I've not updated my blog in quite some time. Indeed, it's been over two months. After so many years, and such a very long spiritual journey, it seems a shame to cease blogging but it's equally difficult to find the time to do so. It's hard to expend time and energy on the blog when I need to spend time and energy working on other projects: reading and research, homilies, or grading student papers.

That said, I'm not quite willing to give up blogging. So this morning, as a truly wonderful Christmas vacation comes to an end, let me bring you up to speed on my journeys.

On December 16th, I took five days vacation with two friends. We made sort of a pact prior to embarking on our holiday that we would not "flaunt" our journey and we have no photographic evidence to give testimony to our adventures. We have but our memories and some really great stories to tell.

I returned on December 21st and charged headlong into Christmas. There were, of course, the requisite parties and gatherings, visiting with friends and family, and frantic attempts to attend to last-minute shopping. This year I had the added delight of celebrating two Masses on Christmas Eve and one on Christmas Day. Indeed, the time required of me to prepare to preach truly fed my prayer life and enriched my experience of the season.

The days following Christmas were chaotic for a host of reasons. If I have time later I'll recount my tale of an aborted attempt to fly to Chicago. It's a good story, somewhat funny, but one that would take too long to narrate now. Though, now that I think of it, I might share another, albeit brief, story.

On New Year's Eve, I received a request to do an anointing of a dying woman. I set out into the cold and drove out to her house. The horror began before I entered the house when I noticed that the porch was "blocked" with a large plywood barricade behind which roamed a legion of cats. Feces covered the porch floor and after I made my way into the house, I was led to the woman in need of anointing. Cats abounded even within the house and the upholstery was covered in what seemed like a good inch of cat fur. Now, as I learned recently, I'm crazy allergic to cats. I also had forgotten to pack my allergy medicine, so I reckon I was particularly susceptible. So there I am, surrounded by a phalanx of cats, and my allergies kick into high gear. My eyes began to water, my throat started to close, and my nose turned into a snot geyser.

Well, any other family would have realized that I was having a pretty awful allergic reaction. This family took it, however, as a sign of empathy and were touched by my emotional response to this woman's plight. In the history of anointing, I can assure you, this had to have been the fastest and I said a prayer after I departed that if I had forgotten anything at all, the Almighty One would fill in the gaps because staying there any longer would have killed me.

For the last twelve days, I've been working in my home parish (St Brendan's). Again, wholly uneventful except for the 11:30 Mass when a woman basically keeled over in the middle of my homily. I continued preaching, so as not to draw too much attention to the situation (figuring she had fainted on account of my beautiful words) BUT when they brought the AED machine out to her, I knew I had to cease preaching. Thanks to the heroic efforts of those around her, she made it to the hospital and is currently on the mend.

Lesson: don't ever tell a homilist to "knock 'em dead." 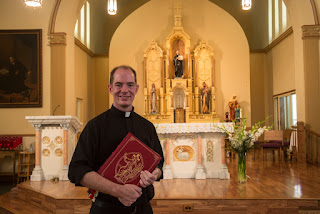 Yesterday, I had the opportunity to preach a Mass for the Year of Mercy at my alma mater, Saint Ignatius High School in Cleveland. Drawing on the Gospel of the Man with the Withered Hand, I suggested that mercy begins when we acknowledge that something, or someone, is missing. Mercy is not something one has so much as it is a way of seeing, a way of recognizing who is missing and working to restore those who are absent to place they belong. That, at least, was the gist of it in my mind...what 1500 boys got from it is, well, another story!

So this morning I'm just preparing for a flight to Boston and then, a few hours later, a flight to Milwaukee where I'm playing a feis. Hard to believe that I left Boston on December 16th and now my month-long journey is coming to a close. That said, it's been a brilliant and grace-filled time and I'm very excited to return to my final semester of coursework and to prepare for where the Spirit will lead!