A number of my seniors are away on Kairos this week, so my mornings are (relatively) free until they return tomorrow evening. So it was with great excitement that I agreed yesterday to attend a press conference here in Detroit where special mention was being made of "U of D Jesuit Pledge Detroit!" Speaking on behalf of U of D Jesuit was Mr. Kyle Chandler ('99) who is the Assistant Principal for Student Affairs. Kyle spoke to the assembly of our commitment to the city of Detroit and its citizens and then, afterward, we posed for this picture with Mayor David Bing. 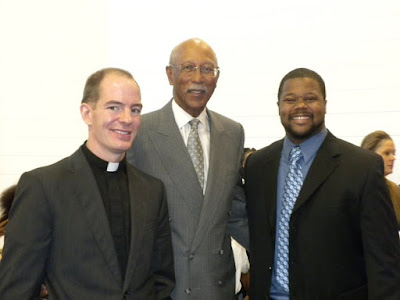 The Kick-Off for "U of D Jesuit Pledge Detroit!" is on October 12th, 2010 and the actual day of service takes place on October 26th. This event demands a tremendous amount of planning and work but I cannot prevent myself from believing that this project is the result of careful prayer and discernment and that we are being the "Men for Others" we are being invited to become: a school community who has opened its heart and ears to a city's people and who has offered its hands and hearts in service of our neighbors.
at September 30, 2010 1 comment: Links to this post

U of D Jesuit Pledge Detroit!

It is fitting, as I embark on my 701st post, that it be with a very exciting announcement. As many of you know, I am doing my regency at the University of Detroit Jesuit High School and Academy (a mouthful, to be sure). Now in my second year, I was asked to moderate the Student Senate this year. 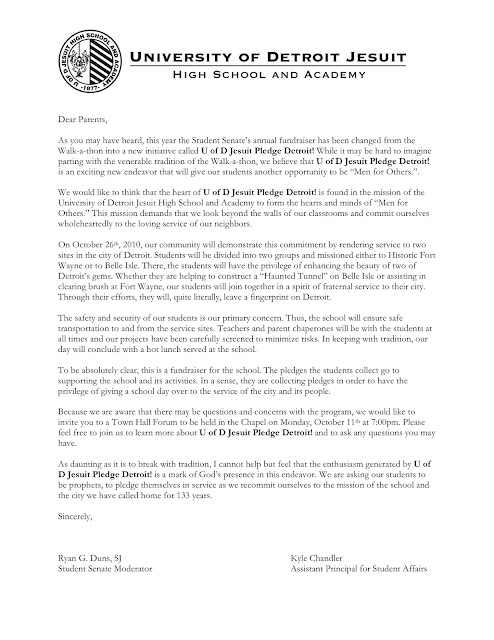 There will be more to come in the near future, but I thought I might share with my readers this exciting initiative. I am extraordinarily excited that I get to be part of a program that brings fundraising into alignment with the mission of an institution: raising money by giving our students an opportunity to be of service to their neighbors in metropolitan Detroit.
at September 23, 2010 No comments: Links to this post

I've not gone anywhere! These have been really busy weeks at school with our first dance, my first board meeting at Walsh Jesuit High School, and preparations for Spirit Week, Homecoming, and our new fall fundraiser called Pledge Detroit!

This latter project, Pledge Detroit!, is absorbing a lot of my free time. I'll be excited to share with my readers the nature of the program later in the week when I find a few minutes to sit down at my computer to do some pleasure writing.

For anyone who is interested, my article in New Blackfriars has made it to print. Entitled "Recovering Rahner's Concept of Being in Spirit in the  World," it is an essay heavily influenced by my great teacher and friend Father Terrance Klein. My dear friend Jane Dryden also lurks in the background, not so much in an explicit way but, rather, as the muse who inspired me to dig deeper into philosophical reflection.

Writing, whether as a blogger or as a teacher or as a hopeful scholar, is a profoundly intimate process. It tries to put into words what seems to be almost impossible to express. Re-reading my own writing recently, I kept saying to myself "Duns! You could have said this better, you could have been more clear, you could have done this....". Alas, it is the fragility of language and something I will have to struggle with forever. Writing, in this sense, is trying to make explicit what roils implicitly in my heart and mind, an effort to make exterior something that is at the innermost center of my heart.

I say with all honesty that I am neither a great mind nor a great scholar. I think I work hard, that I have an open and capable mind, and a willing heart. I love to share with others the riches of the Catholic faith and one way of doing that is through sustained reflection on the very foundations of that faith. This act of sharing is a form of communion, of bringing different voices together and trying to discern the common refrain they sing. So conceived, it is my most fervent hope that anything I write or teach finds its end in making faith reasonable, in making faith credible, and in showing how faith shapes and transforms the human life.

I include a screen-shot of the essay that is published as a preview on the New Blackfriars webpage. I hope I'm not violating any copyright laws. If I am, I'll take it down immediately.

At the Start of a New Year

We had "Mini-Class Night" for parents on Thursday, an opportunity for parents to walk through their sons' schedules in imitation of their days. Mom and Dad move from class to class, listening to short 10-minute presentations by the teachers. More than a few parents approached me and said, "Oh! So you're the Mr. Duns we've heard so much about." Some smiled. Others....well, others seemed more puzzled than amused.

I will admit that while my theology is pretty orthodox (considering I do Yoga as an exercise form, that might surprise some!), my teachings methods aren't always so. To demonstrate transitive verbs to my seniors in philosophy, I brought my teddy bear Paddington to class. Paddington did a marvelous job showing the students that the verb "to carry" can be used transitively to show that Paddington receives the action of carrying (I am carrying Paddington, so at this moment he is carried). It was my hope that my beloved prop would help illuminate aspects of Plato's Euthyphro dialogue. Instead, it led to several of them entering the student senate office, kidnapping my bear, and leaving a ransom note. It took four days for me to recover my old friend.

As I mentioned before, I believe I had something of a paranormal experience at the beginning of the year. Then again, I think it is a paranormal experience when a classroom full of boys leaves my room and the room doesn't smell like a brothel in Calcutta. Nevertheless, I am convinced that when students start to doze off in the middle of class, it is because they have been overcome by a soporific demon who is actively working against the student to thwart his learning. To do battle with such a malevolent force, I have no recourse but to douse the student in blessed water (which I drink all day long): either short range by putting a few drops of water from my Nalgene bottle on his head -or- from a distance with a small, concealable squirt-gun I keep under my desk at all times. The blessed water seems to do an admirable job in dispelling the demon and restoring the student to the land of the living.

Finally, I'm growing accustomed to having multiple names. For some reason, it seems en vogue to give Mr. Ryan G. Duns, SJ as many nicknames as possible. So far the list includes such highlights as:

The latter, "SJ", has become a favorite. While there's something terribly reductionistic about being addressed by two initials, I think it's sort of cool.

Freshmen, I must say, are rather gullible. The wide-eyed innocence may seem to tender and so delicate to some teachers. To me, it simply presents an opportunity to launch into some totally outlandish tale that I can be assured of their believing. Just this week, I had to address half of the freshmen at the "Co-Curricular Fair." In an effort to buy time, I started to tell the students how one of the Jesuits here at school ran BOTH the "Alligator Wrestling Club" and the "Squirrel Club," informing them that this Jesuit had once wrestled an alligator in an effort to save his students and that on a nightly basis he met on our back patio for ongoing negotiations with Antioches Epiphanus IV, the Grand General of the Squirrel Army.

Four students approached me later that day, disappointed that they couldn't find the Alligator Wrestling Club table amidst the other clubs.

Finally, it's amazing how eager students are to accept compliments. Just last night, while standing with a group of colleagues at the football game, one of the students I taught last year kept coming up to talk to me. He poked me with a stick. He poked me with an empty water bottle. He teased me for being bald. As you can imagine, I like this kid a lot. Finally, I turned around and said, "Kiddo, I owe you a great debt of thanks." His face lit up as he waited for me to say something profound, something moving. I continued, "Kiddo, you have single-handedly confirmed my vow of chastity and my own resolution never to have children of my own." When he reached out to touch my shoulder, I feigned horror and proclaimed, "Hey, don't defile the holy goods." He laughed and went off to buy two sodas and probably a dozen hot dogs (and he won't put on a pound because of it).

I've said it before, but I love teaching. I go to bed exhausted each night, but I always offer up a prayer of thanks for this chance to shape the hearts and minds of so many great young men. I really hope that I am teaching kids and interacting with kids in keeping with the core spirit of Catholic moral theology: showing how we are meant to live together, forever, in the Eternal Kingdom illuminated by the light of the Lamb. With a sense of joy and enthusiasm about my life and vocation, I hope to instill a deeper passion for life and love and faith in my students and in the world around me.
at September 04, 2010 1 comment: Links to this post