In my sophomore-level New Testament course, we have been examining the Gospel of Mark. In Mark's Gospel, the earliest of the four written, Jesus is portrayed as the "Suffering Servant." I have shared, many times, that the line of Herbert McCabe has been powerfully influential upon me in framing this course, "If you do not love, you will not live. If you do love, they will kill you." The Mark's portrayal of Jesus as the Suffering Servant certainly makes clear that the cross awaits any willing to accept the Lord's invitation to friendship.

I made the students read Isaiah 53 in class:

He grew up like a sapling before him, like a shoot from the parched earth; There was in him no stately bearing to make us look at him, nor appearance that would attract us to him.


He was spurned and avoided by men, a man of suffering, accustomed to infirmity, One of those from whom men hide their faces, spurned, and we held him in no esteem.
Yet it was our infirmities that he bore, our sufferings that he endured, While we thought of him as stricken, as one smitten by God and afflicted.
But he was pierced for our offenses, crushed for our sins, Upon him was the chastisement that makes us whole, by his stripes we were healed.
We had all gone astray like sheep, each following his own way; But the LORD laid upon him the guilt of us all.
Though he was harshly treated, he submitted and opened not his mouth; Like a lamb led to the slaughter or a sheep before the shearers, he was silent and opened not his mouth.
Oppressed and condemned, he was taken away, and who would have thought any more of his destiny? When he was cut off from the land of the living, and smitten for the sin of his people,
A grave was assigned him among the wicked and a burial place with evildoers, Though he had done no wrong nor spoken any falsehood.
(But the LORD was pleased to crush him in infirmity.) If he gives his life as an offering for sin, he shall see his descendants in a long life, and the will of the LORD shall be accomplished through him.
Because of his affliction he shall see the light in fullness of days; Through his suffering, my servant shall justify many, and their guilt he shall bear.


So I ask, "Of whom is Isaiah speaking." Most students responded quickly: Jesus! To them, raised in a Christian milieu, it was clear that the Prophet Isaiah was foretelling the coming of Christ.

This, however, is problematic.

The role of the Prophet is not to foretell the future. There is no crystal ball. There is no reading of tea leaves. Instead, the Prophet forth-tells: he or she reads the signs of the times and prayerfully discerns what it is that God is doing. This person then exercises the two-fold function of the prophet: A. Critique the Current Order and B. Re-Imagine the situation in light of God's creative power.

Think on it: consider anyone said to be an authentic prophet. Rosa Parks, Gandhi, Oscar Romero, Alfred Delp, Bonhoeffer: each of these women and men felt deep within their hearts the stirring of God who impelled them (1) to Critique the sinful order and (2) to Re-Imagine a world more in line with God's Kingdom. Because they challenged the "powers and principalities" of a sinful world, we humans either tried to destroy or succeeded in killing them. "If you do love, they will kill you..."

Our discussion of Prophets, as those who forth-tell of God's Reign, reminded me of something Herbert McCabe wrote of in his little text The New Creation. There, he writes, "things that are said metaphorically of Israel and literally of Christ are said sacramentally of the Church." (25) Allow me to elaborate briefly. 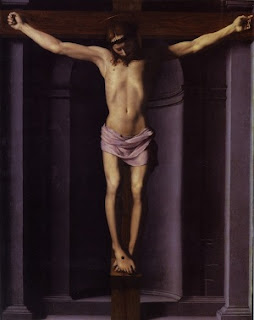 Isaiah did not peer into the future to see the birth of the Messiah. Surely, the Suffering Servant is decidedly not anyone's idea of the perfect Messiah. An oppressed people longs for GI Jesus, not an itinerant preacher. In Isaiah 53, the "Suffering Servant" is synecdoche for all of Israel (synecdoche = part standing for the whole, like saying, "all hands on deck" where hands mean the whole person, not severed limbs). It is a metaphor for how Isaiah (one of the 'Isaiahs' at least) saw the people of the covenant. Having expressed fidelity to the one LORD, they suffer in a sinful and broken world. The people of Israel, the suffering servant, is called to bear these sufferings so as to be a light for all nations, a beacon showing forth their fidelity to their God and his creative power, that all nations may know and serve Him.

As the author of Mark's Gospel reflected on the meaning of this Jesus, it occurred to him and to those for whom he wrote that Jesus was literally the Suffering Servant. In the person of Jesus, Isaiah's metaphor for Israel had taken flesh. Jesus incarnates the people of the Old Covenant and, in and through his flesh, makes flesh the New Covenant. What was metaphorically true of Israel is now literally true of Jesus: he the Suffering Servant, the unexpected Messiah who suffered the evils of humanity; the Messiah who shows us the consequences of humanity's loving fidelity to God's covenant in a sinful world, and the fidelity of God to his people in the resurrection. "If you do love, they will kill you..."


Were I to stop at points 1 and 2, I would join - I am afraid - most Christians who simply take it for granted that Jesus is the Messiah and that he died for our sins. Yet Father McCabe saw one further dimension to being a Christian, which demands that we reflect on what the Word of God is continuing to do. The Word that was said of Israel and the Word that is Jesus Christ...where is it now? For McCabe, the Word is now calling us to be Church, to be a People of the Covenant, and we do so through the Sacraments.

For sophomore boys, they sort of like this. Rather than learning about this Jesus fellow, they finally see some sort of aperture through which they can find themselves called into action (in general, they all want to do something). When you consider it, it is Sacramentally true that we are the Suffering Servant: if we are faithful to the friendship with Jesus into which we are baptized, if we are strengthened by the Body and Blood of the Eucharist, if we are sustained by the Holy Spirit, and if we dedicate ourselves to finding God either through the Sacrament of Holy Orders or marriage or through the single life, we will suffer for it. Those courageous, or folly, enough to follow the Lord and to be a part of the Sacraments of the Church, the consequence is rejection and suffering. The Sacraments of the Church do not efface the sin of the world: they give us the strength to face the sins, to endure the taunts and torments, and to persevere in our friendship with God. We are sacramentally the Suffering Servant because we receive, through the Sacraments, the One who is literally the Suffering Servant, who is himself the Metaphor-Made-Flesh of Israel.

McCabe describes a sacrament as, "a symbol which reveals the achievement of God's plan for human destiny." (26) In no small way, when we enter into the sacramental life, we are remembering our future: we are enacting not some esoteric ritual but, rather, participating in those rituals through which the one who is the hoped-for future of Christians is made present.  The Sacraments do not turn God into something; rather, they turn us toward God by making present in our history the One who has shown us, literally, what it means to be the Word of God. Through the Sacraments of the Church, we become a part of that story, a part of that Body, in history.

I own that today's thoughts are a tad heavier than usual. I'm celebrating a very successful U of D Jesuit: Pledge Detroit initiative, having raised almost $166,000 as of this morning. I'm so proud of the students and the whole U of D Jesuit community and this pride gives me the energy to put my "theologian cap" on this morning as we rest after two days of parent-teacher conferences.

It seems as tho God is only for the poor. Jesus never talks to the rich, so is God only for the poor? and why is the answers to so many peoples problems take it from the rich they live great lives, don't people understand that they should find their own happiness and it doesn't have to do with money