When I was in high school, there was a teacher who was notorious for leaving homework papers and tests totally marked up with red ink. I'm not saying corrected, mind you. A returned-paper tended to have jerky lines running down the paper, often curving, sometimes halting, but the lines were always numerous. As only student are able, we came to believe that this teacher had narcolepsy and simply fell asleep hundreds of times while grading papers, those sudden falls into the abyss of sleep not stopping him from dragging marking pen across the paper.

Turns out that it was just his way of making us think he was grading the papers.

Last night, I was reminded of this as I sat in bed grading a batch of Latin quizzes, I like to grade-and-return overnight so the kids know quickly what they are mastering and what they need to continue to study. Like any class, the grades run from those kids who never miss a point to those who struggle enormously. 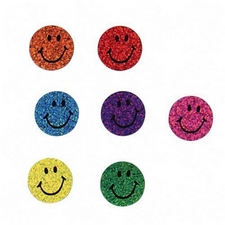 Working through the batch, I hit the paper of a kid who has just struggled all semester. As I started to grade, I even clicked my arterial-red marking pen ("Bane of Ignorance" as I've taken to calling it) in anticipation of impending activity.

Yet there was none.

Not a single word wrong.

Knowing where he sits and as I'm pretty vigilant in administering exams, I jumped out of bed with joy. This kid, I know, has worked so hard and here he is, rocking it on a vocabulary quiz. Such was my joy that I logged into the computer, pulled up the online grading program, and added the quiz/grade so that, should he check late in the evening or early this morning, he'd see his mark.

So I also did what any other semi-seasoned teacher would do. I tore through my drawers (in my desk, not my underwear) looking for a sticker. I finally found, pushed into an obscure corner of a seldom-used drawer, three smiley faced stickers. It was with great pride that I affixed one such sticker next to the 10/10 grade. Not surprisingly, the remaining quizzes - although some of them were good - did not quite bring me the same satisfaction.

This has already been a really long week. We pulled off our second annual "U of D Jesuit: Pledge Detroit" day. We have had spirit week. We have collected money. We have a rally that we have planned for this afternoon. We have a Homecoming dance for which we have sold tickets and t-shirts. My students have read Clement of Alexandria, Tertullian, the Gospel of Matthew, and have come to lust after an increased knowledge of the pleasures of the Ablative Case. I have a cold, I barely have a voice, and I'm not sleeping well.

Yet last night's triumph on a quiz - one of well over a dozen such quizzes we've had already - may emerge as the highlight of my week.

A gift for you from the wilderness…Truth. God is precise: It is a woman Rev 12 that delivers the true word John1:1, Rev 12:5, Rev 12:13 who restores Acts 3:21 all things to the world before Christ’s return. This woman exposes the lies of Satan who has deceived the whole world Rev 12:9. This woman creates a new thing in the earth by fulfilling God's promise to Eve Gen 3:15, Jer 31:22, Isa 14:16. Moses and Elijah are together with the word Matt 17:3 they all three are in this one woman. She is like unto Moses Num 12:3. She was raised up Acts 3:22 from the Laodicean church that becomes lukewarm because they refused to hear her Rev 3:14-17. She is bold like Elijah Matt 17:11, Luke 1:17. As Elijah was alone declaring the true God to the people 1 Kings 18:22 so also her witness alone turns the hearts of the fathers to the children Mal 4:5-6 to prepare a people for the Lords return before the great and dreadful day of the Lord Matt 17:3, Luke 9:30. Those who will not hear Acts 3:23 the true word of God she now delivers to the world free of charge, as a witness, at the heel of time from the wilderness Rev 12:6 will not be allowed inside the walls of God’s coming kingdom from heaven Rev 21. This true testimony of the true value of the blood of the Lamb delivers the truth that not one child of God will be put in a hell fire no matter what their sins. It never entered the heart or mind of God to ever do such a thing Jer 7:31, Jer 19:5. God created evil Isa 45:7 to teach his children the knowledge of good and evil Rom 8:7, Gen 3:22 so that at their resurrection they become a god Matt 22:29-30, Ps 82:6 and are placed Ezek 37:26 in God’s world. Prove all things. You cannot rightly judge this unless you read all that has been written by this woman first Pro 18:13. Start here http://minigoodtale.wordpress.com
God has all power, Satan has none. God will not fail at saving anyone 1 Cor 13:8. Every knee shall bow and every tongue shall confess to God Rom 14:11. When they confess God is just to forgive them and cleanse them from all unrighteousness 1 John 1:9, each in their own order 1 Cor 15:23 according to their hearts of love. Many are called few are chosen to live forever in his coming New Jerusalem Rev 21 on the new earth in the new heaven, none will be lost John 17:12 except one, Satan's son the son of perdition. All of God's children will have a place Ezek 37:26 all will be given new hearts and new minds some justly will be placed in outer darkness Matt 8:12. Outer darkness is not death it is placement on another planet far from the new earth in the new heavens.

I really like this story, I can feel your joy through it, thanks for telling!
(and thanks for the reminder - I just started learning Hebrew and should at least write my vocabulary cards ;-))