Monday of the Third Week of Lent

Readings for March 28th: Monday of the Third Week of Lent 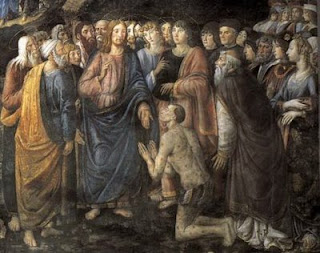 -Maciej Rejniak, '11
In today's Gospel, Jesus tells those listening to him “Amen, I say to you, no prophet is accepted in his own native place.”, a statement that the Jews did not take kindly.
Weren't they the Chosen People, the ones who God has picked from all other races of the world?
Weren't they the ones who have lived according to God's law, even though it is difficult and unnatural to do so?
Weren't they the ones who fought for years in bloody wars for the Promised Land that God has given them?
A Jew listening to Jesus at the synagogue, I imagine, must have thought something like this:
“With what impudence this man speaks! We are the Chosen People, the ones who will bring all nations before the one Lord. We obey the laws and the prophets, we do the Lord's will. This man has no right to accuse us of such dealings, he is wrong, and we must get rid of him before he poisons the minds of the less educated.”
Of course, Jesus speaks the truth; the Jews did not listen to the prophets readily, and they more often then not turned away from the Lord. This is a truth that the Jews do not want to hear, a truth that is hard to bear. The Jews would rather kill Jesus than to be in his presence anymore, as even his presence reminds them of their failure to live up to the covenant that their ancestors have made.
Do we not commit the same crime that the Jews commit in the Gospel? Are we not also guilty of throwing the truth back in the face of someone if it does not comply with our worldview? Even if we bear that truth, do we not make lame excuses as to why we think it is wrong? Do we not hate those people, even if they are our best friends, our beloved, our idols, who have told us that truth? Do we not shrink away from them, hate them, look for their faults, put our guard up?
I have a habit of being blunt with people, almost to the point of being outspoken. If I do not like something, I tell someone right to their face, not caring about rank, age difference, or status. This has caused me to almost get detention on more than one occasion. This has caused me to lose some of my oldest friends. I am hated by some people who I was inseparable from just a few months ago.
This does not mean that I do not commit the same fallacy. Often times I hear things that too, I wish were not true. I too have broken contact with people. I think that everyone has, at least for a short while. It is in our human nature, I think, to do so.
In today's Gospel, Jesus was not afraid to speak the truth to the Jews. The truth may have hurt, it may have not been accepted at the present time, but it was spoken. Perhaps, in this Lenten season, we too, can learn what it means to speak the truth. We often deceive others and ourselves with lies that we start to wear a mask, even if we do not know it. Even though it is cliché, the saying is that the truth will always set you free. That freedom may not be free of sorrow or suffering, but it is better than living a lie.
at March 28, 2011