Monday of the First Week of Lent

Readings for March 14th: Monday of the First Week of Lent 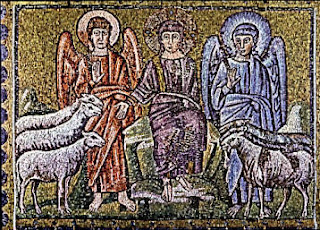 
Today’s Gospel gives us what many would consider to be a Manichean conception of the last Judgment. Humanity is not only separated into two wholly distinct and separated groups, but made his followers into what atheists would gleefully label as “sheep” in the eyes of Jesus. Isn't religion, after all, just another method of social control to turn people into thoughtless animals?
The parable unfolds along the lines of a distinction made between those who have cared for Jesus, who is present in one’s neighbor, and those who have ignored him. At first glance, this would seem a bit preposterous. Surely, the “sheep” could not possibly have cared for their neighbors at everyturn; further, is it not similarly unlikely that the “goats,” or damned, shunned every one of their neighbors at every opportunity? Perhaps this reading misses the mark. Perhaps it is that case that Jesus is not telling us how he judges us but, rather, a challenge to the way each one of us judges and acts in our daily lives. How should we behold our neighbor? With eyes that strain to see the face of Jesus.
Herein lies the challenge. It’s easy to see Jesus in the image of the crucifix or inside of a church. It’s hard to see him in the idiot driver in front of us, or the younger sibling, or that person making asinine comments on Facebook. If it were easy to do this He wouldn’t have had to tell his disciples this and many other adages on the subject.
This is what we should dedicate our Lenten season towards—not giving something up, but rather making a concerted effort to see God in those around us. Jesus gives us the gift of a new perspective by asking us to view our neighbors as Him. This Lent, make the effort to see others not as people, but as Jesus. Christianity is not simply about parroting creeds or reciting prayers. Rather, it is a way of seeing the world and acting in it: with eyes aching to see the Christ, we will encounter a God present in all things.
at March 14, 2011