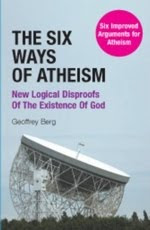 While enjoying my coffee this morning, I came upon this fascinating story at America Magazine's Blog. It appears that Geoffrey Berg, a British fellow with a Master's degree in philosophy, has challenged Pope Benedict XVI to a debate on the existence of God during the Holy Father's visit to Great Britain. His challenge comes in the form of an open letter that he has published on his website and, if nothing else, does provide for some humorous reading.

I have a passing familiarity with Berg's little book The Six Ways of Atheism. Last Fall, I spent several days discussing the topic of religious belief with my senior philosophy students. Berg is kind enough to post adumbrated forms of his arguments for the non-existence of God on his website, so I printed them off and presented them to my students as an opportunity for them to 'think through' the question of God's existence.

To be perfectly honest, I didn't have to do very much prodding for my students to pierce Berg's sophistry.

Take, for instance, the first of six arguments he articulates:


Argument 1: The Aggregate of Qualities Argument

1. If God exists, God must necessarily possess all of several remarkable qualities (including supreme goodness, omnipotence, immortality, omniscience, ultimate creator, purpose giver).
2. Every one of these qualities may not exist in any one entity and if any such quality does exist it exists in few entities or in some cases (e.g. omnipotence, ultimate creator) in at most one entity.
3. Therefore it is highly unlikely any entity would possess even one of these qualities.
4. There is an infinitesimal chance that any one entity (given the almost infinite number of entities in the Universe) might possess the combination of even some two of these qualities, let alone all of them.
5. In statistical analysis a merely hypothetical infinitesimal chance can in effect be treated as the no chance to which it approximates so very closely.
6. Therefore as there is statistically such an infinitesimal chance of any entity possessing, as God would have to do, all God’s essential qualities in combination it can be said for all practical and statistical purposes that God just does not exist.

Point #1 isn't really problematic. But the argument sputters out at Point #2. Look at what I put in bold typeface: "Every one of these qualities may not exist in any one entity." If you look at my post from Monday, you'll see why this is a problem. Berg, it appears, assumes that God is some very large thing, some being or entity in the universe that has these attributes. Now if we believed that God lived in a condo on a sacred mountain, I could see Berg's point. But God's not a thing. God's not a being. God is the reason that there are things, or beings, at all.

If creation is an ongoing drama, God's not one more actor on the stage. Rather, God is the reason that there is a stage at all.

Points #3-6 are fallacious at best. Point #3 does not necessarily follow from #2 (a point which suffers from its own internal incoherence). Points #5-6 are supercilious as presented, although I suspect if I spent the money to buy his book and look at the argument, I'd have the opportunity to read the in-depth calculations he formulated.

If Mr. Berg is attempting to be helpful is breaking people free from idolatrous images of God, I accept his project. If he is attempting, however, to trump all forms of theistic belief, he should have a chat with my students who didn't have a tremendously difficult time dismantling each of his six arguments.

As a wise Fordham philosopher once said, and I repeat for Mr. Berg's benefit, "Your premise is wrong, therefore everything that follows is irrelevant." Theists do not believe in the gods, Mr. Berg, and we do not believe that God is some entity that floats and flits about the universe. There are good and interesting arguments that raise real challenges to the existence of God, but these are not to be counted among them.

I wonder if Pope Benedict XVI could beg off Mr. Berg's challenge and offer, instead, a few clever high school students to stand in his stead. While it would be wholly (holy?) amusing to watch  the formidably brilliant Holy Father systematically dismantle Berg, I think it'd be equally entertaining to watch a few students push Berg on his fundamental presuppositions.
at July 29, 2010