Feast of Saint Ignatius of Loyola 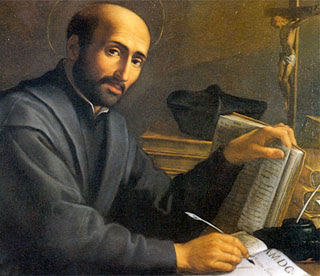 It's amazing that, in a few weeks, I'll celebrate my sixth anniversary (8/13/04) of entering the Society of Jesus. I remember thinking, six years ago, that the eleven-year formation process was terribly long. Priesthood, then, seemed a far off and distant goal. Now that I'm over the half-way point in my formation, this goal is coming into clearer focus.

I think these are hard days to be a Catholic or to be a part of the clergy. Moral is low, anxiety is high, and there is a pervasive air of suspicion that taints the way Catholics see other Catholics, Catholics view others from varying traditions, and the way others perceive Catholics.

Karl Rahner once wrote on the Ignatian Mysticism of Joy in the World. As I remember it, the key insight is that Ignatius understood Creation to be an ongoing story of becoming, of God's activity in the world as Creator. When Hopkins writes that "The world is charged with the grandeur of God," he means exactly this: the world sings forth God's creative activity, a divine light shines forth from the goodness of the created order and guides into the very heart of God's reality. The "God in all things" is not an idle, boring deity. Rather, God is working, straining (Recall Romans 8!), and groaning in creation and we are, each of us, invited to participate in it. Hence the reason for joy: each of us has been and is invited to throw ourselves headlong and recklessly into the event of creation.

To be sure, people do this in varying ways and to greater and lesser degrees of success. Thus, it might pay us dividends to recall the counsel of Saint Ignatius, on this his feast day, to those preparing to give the Spiritual Exercises:

...it should be presupposed that every good Christian ought to be more eager to put a good interpretation on a neighbor's statement than to condemn it. Further, if one cannot interpret it favorably, one should ask how the other means it. If that meaning is wrong, one should correct the person with love; and if this is not enough, one should search out every appropriate means through which, by understanding the statement in a good way, it may be saved. [22]

I write this and feel the pang of conscience: I fail at this a lot. There are some people I find it enormously difficult, if not almost impossible, to give a charitable ear. This being said, I don't think Ignatius wanted milquetoast thinkers: if a person is dead wrong, it is an act of charity to offer correction. Still, the style by which such correction is offered can embody greater and lesser degrees of the charity that Ignatius hearkens us to recall.

I wish everyone a blessed Saint Ignatius Day. Be assured of my prayers and I ask for prayers for the mission and men of the Society of Jesus.

A fine example of this from Ignatius´s own life is his Instructions to the Fathers Attending the Council of Trent, in which he implores his Jesuit brothers, among other things, to "be considerate and kind," to listen quietly first, and to all sides without showing attachment to any opinion, and not to "touch on subjects on which Catholics and Protestants are at variance, but simply exhort your audience to virtue and to devotions approved by the Church."

It´s an outstanding application of the spirituality developed throught the Exercises, and a lesson for us even today.

Do you have an email address I can find you at? You don't know me but I am considering the Jesuits. I am close to a very elderly Jesuit and I'm curious what it's like for the younger crowd.

Thanks for your note. My email address is

I write it this way in hopes of keeping SPAM out of my inbox. So just link lastfirst@yahoo.com and I'll respond.