In the fifteenth year of the reign of Tiberius Caesar,


when Pontius Pilate was governor of Judea,
and Herod was tetrarch of Galilee,and his brother Philip tetrarch of the regionof Ituraea and Trachonitis,and Lysanias was tetrarch of Abilene,during the high priesthood of Annas and Caiaphas,the word of God came to John the son of Zechariah in the desert.John went throughout the whole region of the Jordan,proclaiming a baptism of repentance for the forgiveness of sins,as it is written in the book of the words of the prophet Isaiah:A voice of one crying out in the desert:"Prepare the way of the Lord,make straight his paths.Every valley shall be filledand every mountain and hill shall be made low.The winding roads shall be made straight,and the rough ways made smooth,and all flesh shall see the salvation of God."

I want only to make a single observation about today's reading. The second-half of the passage is familiar to us: John begins to prophesy the advent of the Messiah. That's nice, of course, but why the historical bits up above? Why the reference to Pilate and Tiberius, Herod and Caiaphas? 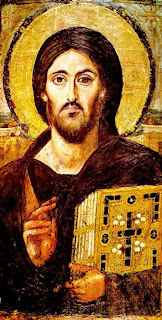 First, Luke situates Jesus' life and work in history. It's not uncommon to encounter people who deny that Jesus ever existed (despite his being referenced by several pagan authors). Luke, however, understood the importance of Jesus to history: in announcing the Kingdom of God, in making it present through word and deed, Jesus shows us here-and-now what God desires for humanity.

Of course, we kill Jesus for telling us the truth about God and exposing the lies we tell to and about ourselves, but we'll get to that when Lent rolls around.

Second, and more importantly, notice that the first figure above is the Roman Emperor Tiberius. Look, too, at the beginning of John's prophecy: "Prepare the way of the Lord." In the space of a few lines, we encounter two 'lords' - one is the ruler of all the lands, the other is professed as the true lord, the lord of history.

In these days leading up to Christmas, it may serve us all well to reflect on the choice our Gospel presents us with: who is the true Lord in my life? In whose court do I wish to dwell - the court of the current leader whose favor I must curry and ego I must stroke or the one who has come to show us what God wants for us, a life lived not in conflict but in peace centered around and governed by his Lordship?