Yesterday, one of the more talented young men I've had the pleasure of getting to know contacted me with the following:


To put it succinctly, I've been struggling with my faith. There have been times in the past year or so when I've questioned God's existence and the existence of an afterlife. I've entertained the idea that maybe there isn't anything beyond this life. But that's a harsh perspective to hold on to for any length of time. I have given it a good deal of thought over the past few months, but today I think I nailed it down to two main issues:

1. I don't get much out of going to church anymore. I've stopped attending mass regularly. I used to feel a real spiritual need that was satisfied at mass, but that has gone away. Now, it seems empty, like pure ritual. I have a hard time focusing and I just feel out of place in church. I understand that feelings come and go, but it's hard to get over.

2. This is my main beef. The Catholic Church as an institution upsets me, especially its teachings on homosexuality. I feel that they are exclusionary and wrong. There's one thing that makes me sick about organized religion, and it's the idea of fostering an "us vs. them" mentality. I believe that's what the teachings on homosexuality do. I read your "I Can't Believe..." blog post from October 24th. I agree that you can't just cut off the Church because of a personal disagreement with some views, and I like your idea that the emphasis should be on believing in community with others. But if everyone just accepts their differences with the Church, how does the Church change for the better and adapt to the times? Are we all required to be cafeteria Catholics, picking what elements of the Church we're OK with and which ones we choose to ignore?

My point isn't to get into a heated debate with you about the Church, although I'll admit I'm curious about your views. I'm struggling with my faith now, and I don't want to be lazy about it. It's alright to struggle and question, but I don't want to shrug of Catholicism and not put any effort into answering my own questions. Really, I just want some guidance, and you were the first person I thought of. I'm sure you're busy, but if you get a chance, I would really appreciate any advice you have.

To my mind, this is what theology actually aims at reflecting upon: not recondite or abstruse conjectures but, rather, the issues that press upon the human heart. This young man realizes, only too painfully, the challenge posed to belief today.

Edited slightly, here is the response I gave: 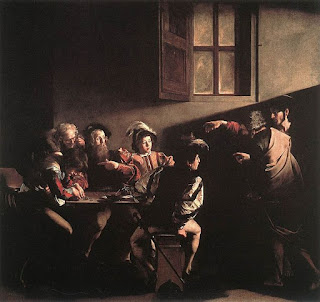 Around the year 1600, Caravaggio depicted the "Calling of Saint Matthew" taken from Mt 9:9. For generations, interpreters have seen the man pointing toward himself as Matthew. I think these interpreters are wrong. Matthew, it seems to me, is the young man who is staring at the money spread before him. This is the "Calling" and not yet the "Call" because Matthew hasn't heard it yet. In this painting, we glimpse the moment before he realizes that he's being addressed from outside the frame, from someone we cannot see, someone who has seen him first and calls him out of the tax booth and into a new relationship. This is, ultimately, the transitus between one life and another.

I reference this because the Scriptures tell us Matthew got up and followed. No hesitation, no second-guessing. I think this is possible only because he had been wrestling with questions, living and difficult questions, and when he heard the call of Jesus he heard in that voice a personal address that offered him fulfillment, that aroused within him a new hope. Matthew's lifestyle involved many rituals:  'rituals' of counting money, of taking taxes, of opening and closing shop, 'rituals' providing the infrastructure that enabled him to question, that made it possible for him to listen with the inner ear of his heart. It is precisely because they had lost their novelty, because they ceased to bear the meaning they once did, that his mind was free to wander and to listen for new sounds, new voices, and to imagine new opportunities.

Considered otherwise, it's the known-and-comfortable that gives us the space and foundation to explore. I'd be heartily disappointed if you today found the same spiritual consolation at Mass that you did in high school. You have grown and matured and your questions have deepened; thus, too, must you listen ever more closely and attentively. Don't be lazy and think that it is up to 'ritual' to do the work of answering your questions...it doesn't and it cannot. You have to work at it under the guidance of the ritual, letting it guide you: the ritual structures the liturgy in order that you don't have to do any excess work, so that you're free to explore new parts of your heart and mind within the context of the familiar. The rites should become worn and tired, like an old teddy bear, yet the comfort we find in them (1) reminds us of old times and (2) enables us to reflect in new ways, to have new dreams.

The question of homosexuality is a hot-button issue within the Church these days, one many of us are reluctant to talk about because of a form of Taliban-like Catholicism that construes certain topics forbidden. Yet, let's face facts: many of us know gay and lesbians and our friendship with them have given us an insight that other generations simply do not have. And here we find both frustration and hope: the Church is born again in every generation, every time women and men have heard in Jesus the good news and confess "Credo" together. The Church isn't a monolith; it's a dynamism, incarnating itself in the bodies of each generation. When we complain about the Church, we must not ever confuse "Rome" with the Body of Christ. You, me, our friends...we are this Body called to be leaven in the world, called out of ourselves to heal the sick, clothe the naked, proclaim liberty to captives, to make the blind see, the deaf hear, the lame walk. We must be the Church we want to see, the Church we know we can be.

Catholicism is constituted both who we receive and what we do. Look around the church some time and think: who the hell invited these people? Hypocrites, jerks, losers, rich, poor, black, white, gay, straight, married, single, divorce, struggling, self-assured, humble, proud. Yet, they all come for something, for someone. Maybe this is why I fit in because, truth be told, I' fit into a lot of the latter categories! We aren't the Church because we're good, but because we recognize that we are struggling to be the Eucharist of Jesus Christ in the world. We aren't the Church because we signed up for it but simply because we have been called into it. It's not so much that we must 'tolerate' differences but that we are called, in every age, to confront the various experiences faithful women and men have had of the Lord's calling and try to discern, together, how God is calling us to be the Body of Christ. Even when it seems as though issues would tear us apart from within, we need to recognize who has called us together and that the lives of Christian discipleship are defined by our struggle always to be what we receive: food for the deep hunger of the world, wine for an insatiable thirst for the infinite.

By the sounds of it you're struggling well. Continue in this. If you should decide to lay Catholicism to the side, I'm confident it'll not be without a fight. If, however, you wish to remain in the Church you will soon realize that there is no "cheap grace" of belief - the gift of faith comes at an awful price: an abiding sense of doubt, the reality of the cross, yet hope that Good will always have the last word over evil. As a wise priest once said, "You can't be a friend of Jesus and an enemy of the Cross." Do not fear the cross of doubt: go toward it and embrace its timbers. You are a man with a great heart and my own heart tells me that the dark grace of questioning which you have been given will, ultimately, be transformed into a renewed sense of what it means to be an active member within the Body of Christ.

I'm grateful that you thought well enough of me to ask. I'm always glad to help where I can by shedding my paltry light into the darkness of God's mystery. I've no great skill in this but to say that I have experienced the transitus, the ache of doubt, and know something of the pain and disorientation this causes.

I entitled this post "Advent of Doubt" because I think that many of the faithful live against a horizon of encroaching doubt. Our culture no longer takes belief for granted and we are forced to reflect seriously on what it is we believe and why we believe as we do. "Doubt" isn't something that besets us from time to time but remains an ongoing struggle. Just as we are always laboring to incarnate the Church in every generation, we do so always under the shadow of the cross.
While not quite a Christmas post, I think it's important to say. I wish all of my readers a very merry and very blessed Christmas and many prayers for a happy and joyous new year!

I admire your ability to affirm the condition of one who questions and doubts. My own tendency is so much to want to talk the questioner or doubter into the right answer — to answer their questions rather than to encourage them to think (and pray).

God is much more patient with questioners, doubters, and seekers than I am.