If there has been a gift in having been a high school teacher, it is a sensitivity to the “So What?” dimension of every lesson. One can prepare the greatest of lessons but unless he is ready to account for the “So What?” factor, the meaning is lost. For good or for ill, students expect you as a teacher to give a hint as to how the material you are teaching relates to real life.

It is with the “So What?” glasses on that I read the letter Archbishop Nienstedt wrote to a mother in response to question about accepting her gay son. The mother, was responding to the Archbishop’s letter appearing on April 28, 2010, in The Star Tribune. This week, a fellow blogger posted a copy of the Archbishop's response to the mother: 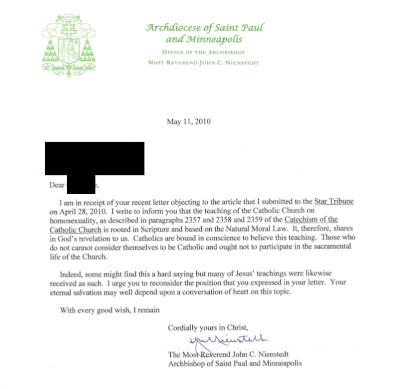 Now, let me ask: how this helpful to a mother who has taken the time to write a letter to her bishop asking for guidance? If one reads the letter and asks, “So What?” can it be claimed that any new ground has been covered, that any new insight has been gained? How has this helped a mother to be more loving toward her son?

In case readers don’t have the entirety of the Catechism committed to memory, here are the three citations from the Catechism:

2357 Homosexuality refers to relations between men or between women who experience an exclusive or predominant sexual attraction toward persons of the same sex. It has taken a great variety of forms through the centuries and in different cultures. Its psychological genesis remains largely unexplained. Basing itself on Sacred Scripture, which presents homosexual acts as acts of grave depravity, tradition has always declared that "homosexual acts are intrinsically disordered." They are contrary to the natural law. They close the sexual act to the gift of life. They do not proceed from a genuine affective and sexual complementarity. Under no circumstances can they be approved.

2358 The number of men and women who have deep-seated homosexual tendencies is not negligible. This inclination, which is objectively disordered, constitutes for most of them a trial. They must be accepted with respect, compassion, and sensitivity. Every sign of unjust discrimination in their regard should be avoided. These persons are called to fulfill God's will in their lives and, if they are Christians, to unite to the sacrifice of the Lord's Cross the difficulties they may encounter from their condition.

2359 Homosexual persons are called to chastity. By the virtues of self-mastery that teach them inner freedom, at times by the support of disinterested friendship, by prayer and sacramental grace, they can and should gradually and resolutely approach Christian perfection.

Quoting the Catechism in response to a person’s question is like saying “Because I said so” to a child. It does little, if anything, to satisfy the inquirer.  Invoking "eternal salvation" yet failing to give some encouragement, or pastoral counsel, seems to me both a grave pastoral oversight.

Very few of us today can claim not to have homosexual friends or relatives. Admittedly, the Church sets a high bar and it is a part of Christian journey to strive toward this goal. Nevertheless, each of us should feel comfortable in asking our pastors for help; each has the canonical right "to receive assistance from the sacred pastors out of the spiritual goods of the Church, especially the word of God and the sacraments. (canon 213). Citing the Catechism and basically saying, “Well, these are the rules. Like it or lump it.” is hardly helpful. To my mind, this letter is very sad: regardless of its intent, it now serves only to reinforce the belief that the Catholic Church is a homophobic institution more concerned with obedience than human flourishing.

Latin is important. So is Scripture and Theology. Yet, I can't help but to think that perhaps the Church needs to insist that seminarians, as part of their preparation for ordination, teach high school for a few years. Then they’ll know what it is to justify each statement, reaching for with clarity and credibility, when responding to the “So What?” question that cannot, even for a second, be taken for granted in a classroom.
at October 09, 2012

I wrote a letter to Archbishop Nienstedt in 2010 about this very topic. I also sought guidance on how to integrate my everyday experiences in living side by side with gay men, women, couples and their children with Church teachings. I asked how marginalizing people fits with Jesus' teachings on loving our neighbors as ourselves. He did not respond. Seminarians AND existing religious, especially those in leadership roles, should live in "the real world" from time to time. Real life is quite a bit more complicated than The Catechism of the Catholic Church allows for. Thanks for posting this. Maybe I should be glad I never got a response.

It's difficult (impossible?) without knowing the contents of the mother's letter, to know with certainty how appropriate the archbishop's response was. I will say that the archbishop's characterization of the mother's letter as "objecting to the article that [he] submitted to the Star Tribune," suggests that she did not write to him as one who was "asking for guidance" or needing help "to be more loving toward her son."

It seems to me that when Catholics write to their bishop "objecting" to a defense of natural marriage, it could be because they are unaware that it arises from the clear teaching of the Church, or it could be because they reject that teaching. If the former, the archbishop's response may have been adequate, but the tone left a lot to be desired. If the latter, the response is clearly inadequate to persuade since all it does is point out that it is the official teaching.

One might also wonder if the archbishop thought that the mother was open to further discussion. I was recently in an exchange with another blogger in which I pointed out the universality of marriage as a male-female relationship throughout history and around the globe (including many non-christian societies), the state interest in procreation and the impossibility of same sex couples procreating, and consequently the fact that it is not a question not of equal rights but of legally defining marriage to include a relationship which is intrinsically different from natural marriage and which cannot confer the same benefits on society. At the end of that the blogger said that my position was based on religion! There are some people who just will not or cannot listen.

I have to agree with the above post. I know the archbishop and he has been very kind to my family. Without the "rest of the story" - ie the letter that this responds to, it is unfair to judge the archbishop's response. Moreover, all humans have stressful days with too much on their plates. This may have been one of them.