In the breaking of the bread 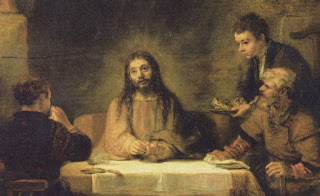 Today's Gospel's scene, so beautifully depicted by Rembrandt, recalls two disciples' journey on the road to Emmaus. In the wake of Jesus' horrific execution, the disciples quickly disbanded. Cleopas and his companion are walking, dejected, when they are approached by a stranger who seems oblivious to the events that had taken place. Incredulous at first, they recount the days' events to the stranger who, certainly to their amazement, managed to explain what had actually taken place. Having heard his re-framing of the story, the disciples become aware of the dusk and invite the stranger stranger to join them for table fellowship. When the stranger breaks the bread, their eyes are opened and they finally recognize the one with whom they have been chatting: it is the Risen Christ.

One way of looking at this passage is as the confrontation between two types of stories. The disciples' version of the story is told against a horizon of death and and defeat and confusion. Their minds and hearts had been pressed to their natural limits. Something wasn't quite right: the empty tomb, the message of the women, these just didn't add up. Left to their own devices, the disciples could not sort this all out.

Hence the brilliance of the passage. Jesus doesn't give them a demonstration of who he is, a series of logical steps. Rather, he re-tells and re-frames the story, expanding the boundaries so that what they had seen could finally be understood. Jesus didn't add touches of spiritual paint to their portrait of events, adding a touch here, a correction there. Instead, Jesus subverts the whole portrait by tearing it from their limited frame and putting it into the context of God's ongoing plan of Creation. Jesus' story doesn't add something to history. It shows the true nature of history itself, the story of God reaching out to humanity time and time again, despite humanity's chronic rejection of this friend request.

Each of us might take a few moments to consider how our normal picture of things might be subverted by the Stranger who enters unexpectedly into our midst. The Stranger may break in upon us at any moment: a chance encounter on the train, idle moments in a shopping line, the quiet of prayer. In such encounters, we risk having our frames widened and expanded and having our lives challenged, or even subverted. May it be that each of us come to know the grace of the stranger, that a chance encounter may leave us with 'our hearts burning within us'.
at April 11, 2012