As I settled into bed last night, consoled and joyful at the beauty of the Vigil Mass, it occurred to me that what I most value in a homily is the preacher's understanding of a question that rests upon my heart. The most meaningful homily, in my experience, is the one that elevates a question that has been burning within me and addresses it in a clear and moving manner.

This got me to thinking about how I would explain Easter to someone who asked about it. Never one to shy away from a challenge, I began to wonder how I'd explain it to my niece Emma who will turn five in August. Emma knows a lot of things: she knows about Dora, how to count in English and Spanish, her colors, her shapes, and she is starting to read. On any given day she is a princess and an explorer, a dancer and a cook. She loves Disney movies and believes in Santa Claus, the Easter Bunny, and she knows nothing of the United States Tax Code. Her life is, indeed, charmed.

So how do you explain the Resurrection of Jesus Christ in language that a child might understand?

Do you remember when we watched Snow White? You laughed at the funny dwarves (don't get used to this - in the real world, it is very politically incorrect) and you sang and danced along with Snow White. You were scared when the Evil Queen appeared and you understood that she was up to no good. It was obvious to you that the Evil Queen wanted to hurt the Good Snow White. You even thought that when she ate the apple that the Queen had won, because it looked like Snow White was dead. The animals, the dwarves, and both of us were very sad when we saw Snow White in the glass coffin. But do you remember how the prince woke her up with a kiss? Do you remember how happy we were when we saw Snow White again?

Do you remember the other movies we like to watch: The Lion King, Aladdin, Beauty and the Beast, and The Little Mermaid? Sometimes it seems like the bad guy wins, doesn't it? But in each movie, we are happy at the end because Simba, Aladin, Belle, and Ariel actually win. Good beats evil.

Emma, a lot of adults think that this is all make-believe. The "real world" is a world where you have to do anything you can to win. If you are bigger than someone else, you can take her Yoo-Hoo. If you are bigger, you can do whatever you want. Some adults think it is okay to cheat at Candyland...if you don't get caught. These adults call themselves "realists" and think that what we love in our movies is silly nonsense. They believe only what they can see.

Today is Easter. Today, we think about how a good man named Jesus made a lot of people very happy. Wherever Jesus went, people seemed to come to life - just like how Belle brought life back to the castle. But you know, people get jealous. A lot of people were jealous of Jesus because he told them that the way they were living was not good, that God wanted them to live with a lot of joy and excitement. Jesus wanted to invite everyone to play in God's playground, but the bigger and stronger people did not like this. They wanted to play by their own rules. So they did what bullies always do: they threatened Jesus and, when he would not back down, they killed him. 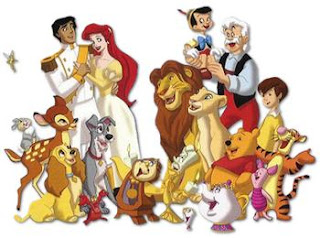 Isn't that sad? They did not have to kill him. But he made them nervous and scared. So they did what Bad Guys do: they get rid of things that scare them.

But, do you know what? We believe that there is a happy ending. Even though the Bad Guys, the Bullies, put Jesus in a tomb and locked it up, we believe that the power of Good is stronger than all of their Bad. We are called Christians because we believe that the story of Jesus did not stop when he died. No, not at all. We believe that on Easter something wonderful happened: Jesus, who had been killed, was given new life. We believe that his Father said, "No! This is my son and he is telling everyone the truth about who I Am. I am the God of life, not death, and I return my Son to you to tell you that that he is who I Am."

Emma, please do not forget the best lesson of your favorite Disney movies: Good will always conquer evil. The Gospel is not like a fairy tale. Fairy tales are like the Gospel, which tells us that that the true Author of Creation will not be stopped by the actions of sinful people. The Gospels tell us that God is still writing the story, that Jesus is the main character, and that we are all called to be a part of this story. When we let ourselves become characters in this story, we are not playing pretend. We are disciples, who live out our roles in a world that needs to hear the Good News. Emma, the Gospel will not give you a magic wand. It will give you, though, a magic heart filled with grace that will spread love and joy. I wish I could give you the magic words like 'bippity boppity boo' that could change everything. Alas, I can only share with you these words: "In the name of the Father, the Son, and the Holy Spirit." These words will change you and, as you grow in love, you will set the world on fire. Go, then, little princess on a mission to enchant the world with the Good News.
at April 08, 2012