Philosophical Investigations and the Control-F Generation 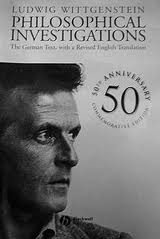 I have the terrible habit of reading multiple books at any one time. At this moment, I'm working through three different texts: Being and Time, Sources of the Self, and the Philosophical Investigations. Heidegger's Being and Time is on my nightstand, Taylor's Sources of the Self is in my book bag, and Wittgenstein's Philosophical Investigations is...well, in the bathroom (be glad for me that I'm reading it and refrain from asking me to borrow it).

As I continue to reflect on the meaning and nature of what I have taken to calling the "Control-F Generation" and its relationship to religious practice, it occurs to me that Wittgenstein's text may be a helpful guide.


One of the dangers facing the Control-F Generation is, to my mind, the temptation to a shallow appreciation for the depths of reality. So accustomed are they to the model of thinking in terms of standardized tests (choose the single best answer) that they might think that all of the world is bereft of ambiguity or complexity. Many times these students want an answer, in fact the answer, now...right now. I know my own students get frustrated when there is no clear answer to the questions I ask them to wrestle with: they are so worried about getting it wrong that they fail to see that being right demands that they step into the shadows to wrestle with tough issues. Education, for many of them, serves more as a theater where they perform the right answers rather than a salon where they encounter new ways of thinking.


One thinks that learning language consists in giving names to objects. Viz, to human beings, to shapes, to colors, to pains, to moods, to numbers, etc.. To repeat - naming is something like attaching a label to a thing. One can say that this is preparatory to the use of a word. But what is it a preparation for? (#26)

To learn the language of literary criticism or biology or theology is not enough, contrary to what a bubble-in-the-answer mindset would have you believe. It is merely preparatory, teaching you the vocabulary and perhaps the grammar of the discipline you are studying. Where we educators fail our students is precisely here: we rest content in that they "know" the material, but do they really know it?

Think about how we tend to go about religious education in our own country. The bishops (ostensibly the teachers of a diocese) have recently rolled out an entirely new curriculum to address what is, undeniably, the impoverished understanding of Catholicism had by its adherents. This I applaud. Yet the framework that has been implemented lacks any real sense of engagement: it caters to to the theoretical, head-level understanding of the faith without giving it a great deal of flesh.

Wittgenstein's understanding of language would not allow for him to use the word "Catholic" as a cipher for something like the Catechism or the catechetical framework. He records the following observation:

For a large class of cases - though not for all - in which we employ the word "meaning" it can be defined thus: the meaning of a word is its use in the language.

An the meaning of a name is sometimes explained by pointing to its bearer. (#43)

When we use the word "Catholicism" we cannot reduce it simply to a book, or a framework, as though "Catholic" were a static word like "jam jar" or "rock." This is the level at which many in the Control-F Generation are comfortable dealing with faith and it makes it enormously easy for them to dismiss propositions because they are not grounded in lived experience, in the meaningfulness of day-to-day life. By reducing Catholicism simply to "things known about" rather than a way of living (recall that Christianity was initially called "the Way"), we imperil the future of faith formation.

When faith is kept merely at a propositional level, as though knowing all the answers equalled being a person of faith,  it becomes one more academic theory. When this theory is challenged or disrupted, it becomes easy to cast aside. I can't say I blame the scores of young Catholics who have left the Catholic Church in recent years due to their disgust with the mendacity associated with the sex abuse crisis. These are Catholics for whom Catholicism is often reduced to a screed against sexual immorality...by bishops who enabled sexual predators to roam with impunity. This hypocrisy on the part of the hierarchy easily erodes the commitment of the faithful, especially if that commitment is not grounded in an engaged love of the Church.

I fear I'm not being clear. My point is this: the word Catholicism finds its meaning not in a Catechism but, rather, in the lives of its practitioners. There are many things to say about this practice, which is why we have a catechism, but the catechism is not a stand-in for one's faith. When we fail to take this into account, when we make our lives of faith simply a "knowing about" rather than a deeply engaged and committed "knowing" that is born of relationship, we risk reducing the vibrancy of the faith to a set of words. These words, then, are picked up or dismissed with relative ease.

Now, more than ever, we need women and men of faith to live out their commitments in a public way. "One has already to know (or be able to do) something in order to be capable of asking a thing's name," says Wittgenstein. If young people do not see faith lived, and only receive it as something taught like Math or English, then they'll have no use for it.

When I was in Weight-Watchers fifteen years ago, I used the Richard Simmons VHS Cassettes to help me get into better cardiovascular shape. These have, in subsequent years, been replaced by running and Insanity. Nevertheless, as anyone who has embarked on losing weight or getting fit using DVD's or VHS tapes, you know that it's not enough to buy the workout program. You have to do it. In a few minutes, I'm going to continue my morning by doing one of the Insanity workouts. I wish I could simply watch it, or read about the different exercises that will be torturing my body, but I can't...if I want to grow in fitness, or grow in faith, I'm going to have to get up and get into it.

Who would have thought that Wittgenstein, Richard Simmons, and Catholicism could all end up in the same post?

The take-away is this: we need to be countercultural. Much of the Control-F Generation's life is lived on the surface - Facebook, PS3, Twitter, Skype - and if we do not come up with creative ways to engage them and draw them into the life of faith, we will lose them. Being a Catholic or a Christian isn't simply a matter of changing one's status update on Facebook. It goes far beyond a mere word and demands a commitment of one's life, a way of seeing the world. If we do not encourage this depth and model this commitment we will, I fear, continue the hemorrhage of the faithful that we are all to familiar with.
at February 22, 2011

Oh to have teachers like you who welcome and encourage deep wrestling with complex questions. I know a number of delightful young people who mock education because their observation and wrestling with complexity was curtailed and mocked in turn) by their teachers who insisted that the answers were simple... just pick one!

Thank you for articulating something that's been on my mind for a while. Especially when it comes to my friends' responses to Catholicism, they see it as wholly an 'institution' that is about powerful men and orthodoxies. How do I persuade them otherwise?

Even worse are the lapsed Catholics who can't understand that the religious education they got in second grade is not the end-all. One friend describes how she can't believe that Satan was a fallen angel who is literally at work in the world. Sigh.

Still, it can be easy to resort to presenting Catholicism as a set of beliefs because it's the easiest way. I am stymied whenever I try to verbalize the peace that I get from my relationship with God - and even when it's not peace, it's a deeper meaning that I keep coming back to. How can I describe that without missing some part of the experience?