Several weeks ago, I came upon a review of a book over at Faith and Theology. The book, Patience with God, is written by Tomáš Halík, a Roman Catholic priest and theologian from Czechoslovakia. 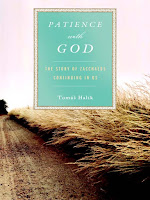 Halík begins with an experience common to so many, especially in the wake of the bloody 20th century and, more recently, September 11th and the so-called "War on Terror." This is the experience of the absence of God, so chillingly posed by Elie Wiesel in Night when, as the gathered assembly watched a young boy hang from the gallows, someone asked, "Where is God now?" prompting the wrenching response: "Where is He? Here is here - he is hanging here on this gallows." This question confronts both the believer and unbeliever, forcing each to face the scars and traces of destruction and devastation, demanding that we reflect upon Wiesel's question: "Where is God now?"

Halík's book is not an answer to this question. It is not a new series of proofs, a set of arguments meant to show that God exists. It is, rather, something of an exercise in maturity. The question of God admits of no easy answers or quick responses and so we must wait: wait patiently, wait expectantly, wait faithfully. Halík does not mean to evacuate the word "God" of its Mystery and majesty, reducing "God" to some intelligible entity the human mind might encapsulate and master.

It is fitting that I mention this today, as the Gospel reading is the story of Zacchaeus (Luke 19:1-9). Recall that Zacchaeus is a squat tax-collector who has heard of Jesus and wishes to see him. Unable to penetrate the crowds, he climbs a tree along the route Jesus walks, hoping to catch a glimpse of this man. He conceals himself in a tree that the the roving preacher might be seen by him. Does not Zacchaeus represent so many today, Halík poses, who are curious about this Jesus but are unable or unwilling to join the crowd? How many of our sisters and brothers have "climbed trees" to watch and see what this Jesus is about?

It was not an argument that brought Zacchaeus down from the tree. It was an invitation. Jesus' voice pierces his leafy hermitage and summons Zacchaeus down to the earth, down into the company of Jesus, and establishes a relationship between the two men. It was not an argument that won the heart of Zacchaeus, nor was it a philosophical debate; rather, it was a direct address, an invitation, that moved the heart that had waited so expectantly along the side of the road.

As a teacher of theology, I sometimes feel a sense of urgency when students question Christianity, or Catholicism, or the existence of God. Yet this book has helped me enormously in encouraging a new sense of patience: my students don't need me to argue with them...they need me to invite them. The fact that the question, the fact that they feel themselves standing in some way outside the institutions of belief, means that they are thinking, that they are questioning, that they are waiting. For these people, my job isn't to give them a philosophical itinerary of belief...I just have to wait with them, patiently, as they await the arrival of God. I can encourage patience with God, the God who addresses each of us, and try to help discern the call of the Holy One in the lives of others.

As far as texts go, this really is a beautiful book. Written in a lovely style, I would suggest this to any today who have grown weary of the philosophical agonistics that so often etches discourse about God. I have found this to be a spiritually enriching text, one that I would suggest to any who has a Zacchaeus in his or her life: someone who questions, who is curious, but is as yet unwilling to be a part of the institution. This text will make sensitive your heart and give you a new sense of what it means to be patient: patient not only with our fellow seekers but also with God.
at October 31, 2010

If you C&P his name from Faith and Theology, you can include the Czech marks.

Beautiful! I love it when you write posts such as this... Can't wait to get my hands on the book....

hello I am from Ireland and I like your post very much. I must seek out this book its very interesting. Your right debates may open the door but its up to us to walk through that door, and that motion of walking takes blind faith, to leap into the arms of God and accept his invitation to come down from the tree of doubt and curiousity and plunge into a relationship with him.
thank you once again