Last night, the U of D Jesuit community celebrated the 135th graduating class. Following a lovely ceremony, the vast majority of students returned to the school for a wonderful "Senior All Night Party" hosted by the parents.

One of the traditions is to conclude the evening with a prayer service, observed at around 4:30 am! I was approached to help plan the ceremony and prepared the following text. I am putting it up online because I know how hard it is to find good "Prayer Service" resources online and I thought this might be of help to people in planning services for their own schools. As it was written, I had five different leaders, one for each of the main parts.

I listened last week to a short piece on NPR concerning the selection of commencement speakers at Catholic schools. In some quarters, rancor has erupted over Georgetown University's School of Public Policy Institute's invitation to Health and Human Services Secretary Kathleen Sebelius to deliver its commencement address (Wow, that seemed like a long sentence).

Here is a portion of the transcript from the NPR conversation:

PATRICK REILLY: Well, this is clearly a betrayal of the bishops.

HAGERTY: Riley is president of the Cardinal Newman Society. He notes that Sebelius is the architect of the Obama administration's requirement that Catholic universities and hospitals offer birth control coverage.

REILLY: This is not someone who the Catholic Church, or Catholic institutions, should be honoring.

STACY KERR: Her visit does not mean that the university endorses her positions. In fact, those who speak at Georgetown do not speak for Georgetown.

Now, as a person who is thoroughly committed to the dignity and preservation of human life, I do have serious issues with the positions of Secretary Sebelius concerning abortion. This said, I recognize that her voice is not a lone voice in our country - decidedly not! - nor is it really a lone voice within the Church.
I think the challenge, as I have posted before, rests upon either an inability or an unwillingness to engage in authentic discourse. When we debate, generally, each side stakes its position and argues from it. In my experience, one seldom changes the position of the other. We become almost fixated with one another, soon seeing the other person more as an antagonist than as a conversation partner.
How much more effective would it be, consequently, if instead of considering only the position of the other we actually took the time to understand what the other side values. That is to say, underneath the floorboards of a position, what is the value-structure that serves as the foundation? While we might not have much luck engaging in discussions of position, I do think it more fruitful and beneficial to share what it is we value with one another. If we can arrive at a set of shared values, I suspect, we can creatively find new solutions to problems that have proved intractable in the past.
Secretary Sebelius, in her remarks at Georgetown, recognizes the importance of this conversation:

Ultimately, public policy is about making difficult choices. Today, there are serious debates underway about the direction of our country – debates about the size and role of government, about America’s role as a global economic and military leader, about the moral and economic imperative of providing health care to all our citizens. People have deeply-held beliefs on all sides of these discussions, and you, as public policy leaders, will be called on to help move these debates forward.

Rather than excoriating the other side for disagreeing with 'my' position, how much more fruitful would it be for us to have debate-advancing conversations which would both uncover our values and lead us to see that, very often, our disagreements are eclipsed by the common ground on which we stand and the virtues we share.

For a long time, I have found people like Patrick Reilly profoundly unhelpful. Their finger-pointing tends only to galvanize the sides and encourages a sort of myopic fundamentalism that blinds both poles of a discussion. As a tradition that values both Faith and Reason, I think the Catholic Church and its universities are singularly able to play a mediating role in these important discussions, drawing various voices together in a spirit of charity and inquiry, and probing beneath the surface positions to arrive at commonly shared values. No one converts because of a good argument. Conversion happens because, through investigation, one's heart is moved by what another values and, in the process of changing what one values, one's life changes.

Perhaps this is why I love teaching: my job is to help to form the hearts and minds of students, to cultivate within them an acute mind and a vulnerable heart, that they, too, may dwell capably in a morally complex world and discern how God is calling them to share in, and promote, the values of the Kingdom to a broken world.

Moral Wisdom and a Case Study

Due to unforeseen circumstances, I was approached last week and asked to teach two sections of Junior Morality. Since the seniors had had their last day of school - meaning I had picked up two free periods -  it seemed only natural that I would trade my thirty seniors and my two free periods for sixty-one juniors.

When I was in high school, I hated my course in morality. Not, to be sure, because I was particularly immoral or wanted to lead a debauched life. Rather, the course seemed totally bloodless: it seemed to reduce the Christian life to a bunch of proscriptions, a litany of Do Not....Or Else.... statements. Granted, I was an adolescent and my memories of the course are etched by how my 16-year old self received the information. It seemed then, and still seems, that most courses in Catholic morality obsess over what goes on in the area of the human body covered by an apron. Too often, we fixate so much on sex and things related to sex that we neglect many other important issues.

Since I haven't much time with them, I am focusing what classes I have with the Juniors on fundamental topics: love, sin, conscience, suffering, etc.. Their modus operandi tends to be to ask a lot of particular questions such as, "Abba, is it a sin if..." and I find this frustrating. I simply don't think it is my job to tell a bunch of juniors whether something is or is not sinful, as if I were a lonely expert at the Antiques Roadshow examining people's trinkets. Instead, I want to help in forming them so that they have moral eyes and the ability to discern well what is, and is not, sinful.

To this end, I wrote my own Case Study for my students. Before the case, I attached a Didactic explaining the rationale behind the Wesleyan Quadrilateral and how it might contribute to moral discernment. Rather than a topic addressing abortion, or euthanasia, or pornography I wrote a little narrative about Corey and his (possible) struggle with academic integrity. If readers are interested in reading the case, or learning one approach to moral reasoning, I would encourage them to click the 'read more' below to read the case study. I have removed the instructions I gave the students, as I do not suspect many readers would care much about my style guide!

For a few moments, I thought I might take a picture of my bedroom to show its utter disarray, at least by my standards. I have some slowly-being-filled-with-books boxes on the ground, my laundry is all over the place, and there is an unprecedented amount of dust on my Darth Vader mask. If it says anything, it testifies to the fact that the end of the seniors' last week of school (tomorrow is prom) and that I play a role in making sure things go off smoothly. Just yesterday, in fact, I
Not that this is a lot by the standards of a regular person's workday, but for a high school teacher I found it to be quite a bit to handle!

So, this morning, I woke up a bit early and turned to today's Gospel reading. In the wake of yesterday's chaos, I retain hopeful for a semi-smooth day. The words that struck me, though, title this post:

Jesuit formation is very long. Usually 11 years from entrance until ordination, it may be asked whether the length of the program is worth it. Today, deep within my heart, I felt something "click" into place...or back into place...that brings me peace and excitement. 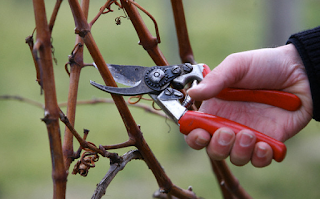 Jesus Christ is the Word made Flesh; He is the God's 'Yes' to Mary's 'Yes' uttered on behalf of humanity. His 'Yes' is spoken to fearful and broken hearts, giving them the courage and the hope that life is stronger than death, that good will conquer evil. Christ's 'Yes' promises that at the edge of the darkest night there plays the first rays of the morning sun, the light that will chase away darkness and bathe creation in the splendor of the new day. Christ's 'Yes' to friendship, to each of us, allows us to drop those things, those lifeless branches, which hold us back and tap into the true source of our lives. Christ's 'Yes' prunes away the old and makes way for the new.

I am not living the life I ever wanted. How could I ever have imagined a single day like yesterday, let alone the experiences I have had these years? Impossible. I am living the life I desire, a life of 'Yes' to friendship with Christ, a relationship that impels me...or drags me...into new and wondrous experiences. I am living a living inflected and etched by the "grace of yes" and I hope to continue to be pruned by this grace in the years to come.

Each of us, I suspect, feels something deep within, a stirring that wants to cry out YES (not in some When Harry met Sally way, mind you). Perhaps it could our collective prayer to find the strength to utter, even if near-silently, a quiet 'yes' to God's friend request, a 'yes' that inaugurates a journey not of wants met but desires enflamed.