I wish I could say that I'll be handing out candy to trick-or-treaters tonight, but I think instead I'll be staying in doors, recovering from a cold. It came upon me suddenly yesterday and today I've been beset with a sore throat and a runny nose.
Alas.
I feel like a blogging deadbeat. But there's really nothing interesting to report from my end: we're heading into the home stretch of the semester and I'm feeling very confident. I'm sort of excited to begin preparations for this years Thanksgiving Feast -- I have chosen the wine already and I've begun to sketch out the exact nature of the menu.
Say a prayer for Drew Marquard, SJ who will be running the New York City Marathon on Sunday. Afflicted with a cold or not, I and a number of other guys from the house will be going down to cheer him on. Truth be told, I like my part of the marathon best: I get to stand with a tasty beverage (Starbucks, I should think) in hand, waiting for Drew to run by so that I can scream his name for 2.3 seconds.
Say a prayer and have a great weekend - and, if I can do so, I'll put up some post-marathon pictures come Sunday.
at October 31, 2008 2 comments:

Just about six months ago, I made my debut pitching for the Blaqrobes - the Jesuit Scholastic softball team. On my first night, I was hit in the left ankle by a wild throw, forcing me to learn to use crutches.
During batting practice last night, I pitched around a dozen balls to Drew Marquard, SJ. One whizzed by 3" from my head. One left a mark on my left calf.
And the third has rendered my left foot completely black-and-blue.
There's brotherhood, for you.
There's a 25% target-accuracy, to boot.
Let it be said that even in excruciating pain, I still pitched the game. And we tied - so we're now 1-3-1 (we are undefeated in the co-ed league).
I meant to post this earlier, but as some of you know last Sunday (October 19th) was my 29th birthday. We had cake on Saturday night. We had drinks on Sunday night. We had ice cream cake last night. And we're having a celebration in the city tonight. 4 of 5 nights of celebrating...it's like Hanukkah without the candles (and the presents - my parents still haven't sent me a gift. "It's in the mail." Yeah, I've heard that before).
Apart from my birthday and my injury, nothing exceptional to report. The undergrads are in the midst of mid-terms here at Fordham, although the mid-term phenomenon doesn't much affect grad students. I'm just laboring away at the weekly papers I have to do, while trying to make time to do the outside reading that I so enjoy.
at October 22, 2008 2 comments:

Thank God for the Devil Rays

On this night, the mighty Devil Rays have vanquished the Boston Red Sox. This is great and glorious news for many of us, especially those who love to root for those who have never had a chance to represent their league in the World Series.
I might not tell you who I'm rooting for in this election, but I've not trouble telling you who I'd love to win the World Series.
at October 20, 2008 1 comment:

For today's session of "The Catholic Imagination" Drew Marquard, SJ is going to screen The Mission for the students. Next week he'll lead the discussion, picking up the elements of Redemption that are at play throughout the film.
The Mission is one of my favorite movies, not least because it features gorgeous music by composer Ennio Morricone. In easily the most famous, and beautiful piece of music from the film, I commend to you Gabriel's Oboe:
at October 15, 2008 No comments:

In Honor of Cleveland's Victory 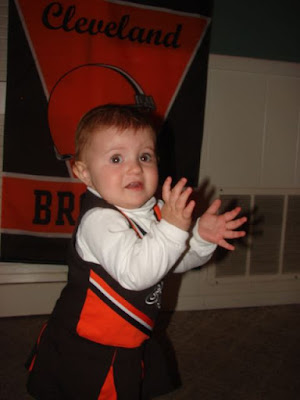 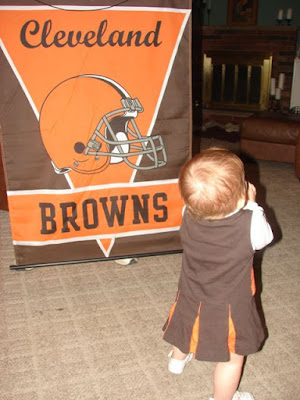 With the way they've been playing, I thought she'd be driving before I got to post these.
at October 14, 2008 No comments:

For quite some time, I have had mixed feelings about weighing in or writing on the topic of  politics. "Your realm," a friend once told me, "is to be priestly, not political." I reckon I've bought into this, preferring to pray quietly and to remain silent on many of the issues that have arisen during this election season.
It is not as though my silence is without good reason. For were I to say that I intended to vote for John McCain, there would be cries that I hate the poor; to suggest a vote for Obama would raise cries that I hated the unborn. In particular, I have been dismayed and horrified by the caustic and hateful comments directed toward Catholic bloggers who voice, in any way, support for Obama. Civil discourse seems, yet again, to have been thrown out the window. Is it a wonder why a Jesuit scholastic would prefer to remain silent?
But can I, in conscience, stay silent? Am I so wholly removed from the world of politics that I am permitted only to direct silent prayers for the coming of the Kingdom, but I am not to speak of how I envision this coming about? As a Jesuit and a son of Ignatius, it is my life's labor to be a contemplative-in-action, one who brings himself to prayer in order to discern better how it is that God is calling him back into the world. My ears grow attuned to the cry of the oppressed, they strain to listen to the countless silent voices squelched by sinful and oppressive structures. I open my ears and let their words and stories penetrate my heart. I lift these voices up in prayer. And yet am I to remain in silence about the political structures that both abet and promise to alleviate the oppression that is a scourge to so many?
So let me say something about my politics. It seems to me that most of our problems are man-made. Lack of food, the general disregard for the value of human life (from the womb to healthcare to education to care for our elderly and infirm), war, an unconcern for the environment, an economic crisis precipitated by greed and lust for money, and pernicious forms of prejudice and discrimination...all of these can be traced back to human artistry. We need look no further than to one another to see who the real architects of our malaise is: it is us.
As a Christian, I cannot help but to look at the suffering and strife of so many and ask, "Lord, where are you in this?" Again and again, I am drawn in prayer and reflection to the realization that Christ is now where he always has been: with the poor, the helpless, the downtrodden, and the oppressed. As a Companion of Jesus, these are the men, women, and children that I have pledged my life and heart to serve as their brother and, God willing, their priest. As much as I'd like to say, "Let me give you spiritual counsel, but let's leave politics to the politicians" I would be remiss in doing so.
You see, my question at the end of the day is, "With my vote, how am I contributing to the furthering of God's Kingdom?" Is there a place for abortion? Is there a place for war? Is there a place for children to be deprived of an education? Of healthcare? When I enter the voting booth, I am certainly going to follow my conscience in asking, "Which of these is building up God's Kingdom better?"
I admit that there is no ideal, or perfect candidate. But it is our burden, and our privilege, as citizens to be able to vote for the man who will lead our country for the next four years. In my mind, I am trying to vote in and for the narrative of God's Kingdom, a Kingdom that Jesus Christ embodied in his ministry on earth. I can no sooner be a one-issue voter than I can, in conscience, refrain wholly from voting. So it is with a discerning eye and an open heart that I will approach the booth this year and, in casting my ballot, I will do so with a prayer-filled confidence that the person whom I envision leading our country will embody more fully the values of the Kingdom.
at October 07, 2008 3 comments:

I apologize for being quiet this last week. I've been really busy between musical engagements and trying to get ahead on some of my coursework.
I have a bunch of pictures that I need to post, so after my 5k tomorrow morning perhaps I'll have a chance to upload them.
This should be a busy, but fun, weekend: I'm going to a movie tomorrow night, a show on Saturday, and I've to cook on Sunday. I also have a good bit of reading to do and a paper to work on, so there'll not be a ton of free time...which is a good thing, I guess.
And a quick Happy Birthday to my sister Reilley -- she turned 22 today.
at October 02, 2008 1 comment: