Tuesday is a Friday

Thanks to the hard work of our students in raising over $150,000 in our Pledge Detroit! campaign, we do not have school either tomorrow or next Monday. I have to work tomorrow to supervise nearly 100 students who failed to bring in their pledge quota, but I don't really have to do any work. I just have to put them to work or waste five hours of what would have been their day off. Alas.

I'll head off to Chicago tomorrow evening and then, on Friday, I'll play for the Mid-American Oireachtas. This is sort of like a mega-feis, for those into Irish dancing, and for those who aren't: it's like an enormous pet show, but for children who do Irish dancing.

I return Sunday evening with, I hope, enough time to do some laundry. On Monday I'm flying to Tampa to participate in the "Thought Partner Gathering" hosted by the Society of Jesus where we'll discuss communications.

It's really hard to believe that Advent is nearly upon us. This year, I've decided to pray through Advent with the a text entitled Advent of the Heart: Seasonal Sermons and Prison Writings by Alfred Delp, SJ. Delp was a Jesuit executed at the hands of the Nazis in 1945. If you get a chance, his writing bristles with prophetic energy that extends beyond the walls of his prison cell and touches hearts nearly seventy years removed from his own setting.
at November 23, 2010 2 comments:

Last Friday evening, I went to the movies with another Jesuit. We bought our tickets early, went to a diner for dinner, and then walked back over to the theater with enough time before the start of the film to ensure that we'd get good seats. Having secured seats, I turned off my phone and slid into my seat so that my feat rested on the unoccupied seat in front of me.

Moments before the movie began, two men sat directly behind us. I would have taken no notice of them, really, save for the fact that one of them seemed to be an aggressive nose-breather. At least, that's what I thought at first. Over time, I began to wonder if it wasn't simply the case that he had forgotten a tissue and had a case of the drippies. Still, I ignored the snuffing and snorting as I became more and more engrossed in the movie.

After a time, though, I became acutely aware that the sound of the sniffing was growing perilously louder. Not louder as though he were wrestling with a particularly stubborn train of mucous, mind you. Louder as in, "I think this guy is right next to my ear." Just as that though flashed through my mind, I felt something brush against my head: the man, it appeared, was sniffing my (scant) hair!

Now I admit, I do use a particularly delicious-smelling shampoo (it's some tea tree mint concoction that was on sale the last time my shampoo ran out. It was both plentiful and cheap and, as I'm balding, a little goes a long way). In fact, when I lather my balding pate the smell of the shampoo usually makes me hunger for cake frosting. Anyway, I had taken a shower just prior to leaving for the theater so, I suspect, the smell of the shampoo still lingered. At least, I'm assuming this: I can't say I noticed the smell but, it appears, the fellow behind me sure did.

So there I am, frozen in place as the man behind me in a dark theater is sniffing my head, and I am rendered mute. Rare event indeed. Listing from one side of the seat to another, I moved my head to the other side of the headrest in hope of evading the shadow sniffer. It does seem to have worked, although I remained frozen in place for the next two hours fearing the thing that goes *sniff* in the night.

Hockey season begins today. I'll be heading off to the rink for the 5:30 game. This will be the midpoint of a day that involves: picking up the remaining prizes at Best Buy (the prizes to be awarded to the high earners for Pledge Detroit!),  writing a test for the sophomores, finishing my treatment of Nietzsche's Beyond Good and Evil for my senior philosophy class, composing a college recommendation letter, cleaning my room, meeting my formation director, and meeting a friend for cocktails this evening. A busy day, indeed!

I'll be at the Mid-American Oireachtas, the regional championships for Irish dancers, next weekend. This year the event is being held in Chicago where I'll get to see family and friends for the whole weekend. I return to Detroit on Sunday night only to depart on Monday for a three-day conference on communications being held in Tampa, Florida. Then on the third, we have a dance - the "Santa Bash" - that the Student Senate is running and that I will be chaperoning. So I probably should sign the contract for the two artificial snow machines I want to rent and the strobe lights that will help to supply some of the special effects....

In the wake of Pledge Detroit - the long run-up to the event and the weeks of collecting and counting now over $151,000 - I am glad to return to the normalcy of teaching. I cannot but be grateful to God for such a spectacular event and I am equally grateful to the support of my Jesuit brothers and my colleagues who worked so hard on this initiative. This year we raised, so far, $32,000 more than last year. I think this is the mark of a good spirit of resurgence in our city and I hope that U of D Jesuit is the leader among other institutions in committing ourselves to this city.
at November 20, 2010 No comments: 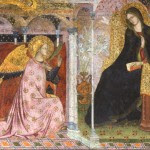 It occurred to me the other day, as I stood in line at a convenience store that had already put out its Christmas decorations on November 1st, that we spend upwards of 17% of our retail year in the Christmas Season. I mention this simply as a random fact although, in mentioning it, it does remind me of a book I would like to recommend to my readers.

I recently acquired a copy of Full of Grace: Encountering Mary in Faith, Art, and Life written by Judith Dupré. The consists of fifty-nine meditations on Mary, different perspectives drawn from the author's own life and experience, that help to introduce the reader to the one confessed to be "blessed among women."

What we have in this text is an accessible book of art and theology, woven with narrative, that sheds light on a figure who plays such an important role in the devotional lives of countless Christians. Especially arresting is the variety of beautiful photographs contained in the work: classic works of art, modern interpretations of Mary, and various pictures of architecture abound. 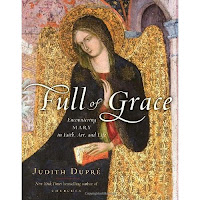 There are sections of the book that touch me rather deeply. One meditation, "A New Understanding," meditates on the chilling prophecy of Simeon who proclaims at the presentation of Jesus in the Temple that "a sword will pierce your own soul." Dupré uses this experience, and the unfolding awarness on Mary's part that Jesus must walk a singular path, to meditate on the experience of children with special needs. While all parents know something of endurance, the parents of autistic children know acutely what it means to wait patiently, to endure patiently, through long periods of struggle and anxiety. The dream a parent has for a child at birth must be released, let go, as the child's reality dawns. This entails a period of mourning as the what-was-hoped-for is set aside and what-is-now is embraced and, sometimes, endured.


The experiences of parenting an autistic child, Dupré suggests, mirrors the experiences of the Blessed Mother who was "called to trust the way of the child who was hers but not hers. She had to grapple with her own lack of comprehension and, later, that of the crowds who did not grasp what her son was trying to say." The silent witness of a parent who must endure side-long glances and muttered comments by strangers is subsumed into Mary's own experience. The silent endurance of a parent, Dupré encourages, is not undergone alone...for we have Mary at our side.

This book would make a terrific gift this holiday season. While its beauty will entice people to buy it for the coffee table, I should think it is better read than looked at. The art and narrative intertwine to draw the reader more deeply into an understanding of who Mary is for us today and how she can accompany us on our spiritual pilgrimage.
at November 13, 2010 5 comments:

I recognize that it's unflattering

Here are two videos taken of last week's epic "U of D Jesuit Pledge Detroit!" day of service. Watching this forces me to consider putting on more weight, particularly when you see the clip below.