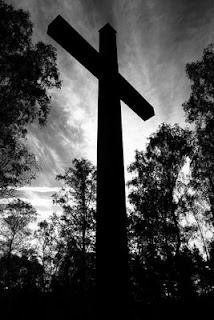 I arose early this morning and joined the Benedictine Monks of Saint Meinrad's Archabbey for morning prayer. Accustomed as I am to Jesuit morning prayer lasting, typically, around fifteen minutes I was wholly unprepared for the beautiful hour-long prayer incorporating spoken psalms, singing, and silent meditation.

As I meditated in the wee hours of the day, hours before the sun had risen, my heart was snagged on Pilate's phrase "Behold, the man" or Ecce Homo. When Pilate brings Jesus out to the restless crowd, he proclaims to them, "Behold, the man" and is met with cries to "Crucify him, crucify him!"

Normally, I guess I take for granted that Ecce Homo points to Jesus. But today, for some reason, I had to pause: is Jesus the only one I should behold? Perhaps there are others who need to be looked upon.

Ecce Homo: Pontius Pilate. Here is a mid-level bureaucrat in charge of Jerusalem who, by scriptural accounts, knows that the man before him is innocent of the charges. He knows he is innocent but he lacks the courage, the conviction, or the strength to speak up for the man on trial. He simply acquiesces, too much of a coward to go against popular opinion, and the result is the death of an innocent man.

Ecce Homo: the chief priests and the religious establishment. They are offended that this itinerant preacher would dare to question their authority, dare to shed light on some of their internal inconsistencies, dare to claim that he knew better God's ways...for he was the Son of God. This Jesus posed a threat to their own security and power, so they did what is natural to humans: they gathered together and conspired against him. Their wounded egos and challenged security led them to deliver an all-too-common ultimatum: agree with us, be silent, or perish.

Ecce Homo: the crowd. The crowd who, just days before, welcomed Jesus upon his entrance has now turned against him. How fickle. How capricious. How faddish. How like us! Are we not too easily given over to being front-runners, backing the "hot thing" until it is tarnished, or out of style? We settle for soundbites and soaring rhetoric, allowing our passions to be stirred up and enflamed...often, sadly, without our giving much thought or discernment to this process.

Ecce Homo: Jesus. Jesus, through word and deed, has shown us the shape of the Kingdom. He overturns the previous social order, hammering away at a central concept: The Kingdom is coming, it is here, but it looks nothing like what you think it does. It's not filled with self-righteous beautiful people, with the religiously pure or the perfected. The Kingdom comes and through its gate stream those we want nothing to do with: prostitutes, tax collectors, the poor, the lame, the infirm. Those who have been thrust to the margins of society, the Anawim, are being summoned back and welcomed with great fanfare. Jesus reconstitutes the nation of Israel with his own body, and we kill him for it.

Ecce Homo. Today, we remember (literally, we make present) the story of Jesus. This isn't something that happened 2,000+ that we look back on as a quaint story, a dour-yet-necessary precursor to Easter and its tasty brunch after a quick Mass. This is a story of today, a story we all too frequently enact on a daily basis, a story we should see not as a frozen picture but as a living and breathing indictment of our own lives today. How often are we one the figures who are too cowardly, to insecure, or to gullible to do what is right? Too often, I fear. Too often.

Today we remember in the liturgy just what happens when someone loves us enough to tell us the truth: we react with violence. Little truths beget small violences...the big Truth that Jesus proclaims - the truth that we aren't on board with God and that we've got the whole Kingdom thing wrong - begets his execution. When today we hear the words proclaimed "Behold, the man" perhaps it would behoove us not to thing that this is something said so long ago, something said about someone else but, rather, something that implicates each of us each day. How are we a part of "the man" complicit in the ongoing crucifixions that plague our own world? Do we have the courage, strength, and conviction to respond? For this, let us pray.

If you do not love, you will not live. If you do love, they will kill you.