What Did You Do to the Roof?

Watching my niece this Christmas vacation, I was struck with how powerful the imagination is. One night, her voice invested with all the urgency a 3-year old can muster, she told my sister Torrey that they were on an adventure in the haunted forrest. In her mind, the family kitchen was transformed from the place we ate into a spooky wooded path. Emma knew that there was something in these woods, something none of us could see, and she held her finger to her lips while tip-toeing out into the dining room, leading us all to safety.

There is, then, something wonderfully childlike about Ignatian prayer. My Emma can become Dora in an instant; I, likewise, can become a friend of Jesus, a casual bystander, even a hostile party. This morning, as I prayed on today's Gospel, I found myself not as Dora, nor as a particularly close friend of Jesus (rough night of sleep), but, rather, as an interested spectator who comes to see the commotion surrounding this Jesus fellow.

When Jesus returned to Capernaum after some days,
it became known that he was at home.
Many gathered together so that there was no longer room for them,
not even around the door,
and he preached the word to them.
They came bringing to him a paralytic carried by four men.
Unable to get near Jesus because of the crowd,
they opened up the roof above him.
After they had broken through,
they let down the mat on which the paralytic was lying.
Now, I guess that people are often caught up by how much faith these people had in Jesus that they would actually enact a sort of home-invasion in order to get their friend to him. I can see this. Yet my first reaction, in prayer, is "What the hell do you think you are doing??? You are on this man's roof! You are digging a hole in the roof!! You are destroying this man's property!"
Some people call this faith. I call it criminal trespassing.
This is probably why I'm not the Messiah...and why I'll never be a saint.
My imagination takes me to a place where this Jesus guy has lived with his mother until he was around the age of 30 (is he Irish?) and then starts something of a full-time small business as a prophet who has a burning desire to get his message out there (Yep, almost certainly Irish). He goes home after one of his junkets and, to the surprise of the neighbors who had grown accustomed to his eccentricities, a ton of people arrive at his door. 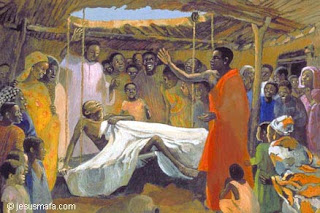 So great is the crowd and so desperate they are to be near him, to be touched by him, that people will resort to drastic lengths. So they create an opening in the roof of Jesus' house. Having seen the crowd, they conspired together to do this: you climb up and start digging the hole, you get some ropes, the two of us will get him up there. Surely Jesus realized that there were people digging through his roof, that there were people hacking and digging through the ceiling.
These men are strangers, uninvited guests, who force their way into the home of the one who might help them, the one who gives them hope. They bring their friend - at great risk to themselves - so that he may have life and have it abundantly. They risk their own freedom and well-being that another may have life, that another may have a chance at a life without scorn or ridicule or prejudice on account of  his condition.
Jesus' response isn't rage, or anger, or irritation. He doesn't present them with a bill or call the police. Rather, he takes note of their faith and forgives the paralytic of his sins. The men went to great lengths - illegal lengths? - for their friend. They risked much on account of the hope they had in Jesus. Jesus' response? Not anger, not irritation, not exasperation...but an act of inclusion that makes the man, and those who loved him, whole.
I mention this simply because I know how easily I get caught up on procedures and protocols (I'm a high school teacher...procedure and protocol is all that gives me stability each day). If I had been standing there with Jesus, I would have been aghast at what these guys were doing to the roof, losing sight of what is really most important: the desire these men had for their friend, their hope and faith that this man Jesus could make him whole. Amidst the dust and debris of his broken roof, Jesus recognized what is truly important in life: the love we show to other people. Things, future costs, the risk of inconveniences...these, it would seem, cannot and must not get in the way.
So, yeah, I'd probably be sympathetic to the scribes and pharisees...at least at first. Perhaps, though, my heart would be moved as I saw this long-suffering paralytic stand and be embraced by his friends. Perhaps my hardened sense of rectitude would be softened as they walked through a cloud of dust mixed with sunlight out into the world where, for the first time in many years, the paralytic could be seen as a human being, a brother. Perhaps then I'd see that even in his own home, Jesus is the great relativist who puts all things into perspective by "giving and not counting the cost" and enduring the destruction of his own property in service of the least of his human family...all in the service of God's Kingdom.
at January 14, 2011