I would briefly like to use the Gospel of John to meditate a bit further on the relationship between reason and faith. Actually, I would like to use two small snippets - two questions, really - that I see as serving as bookends to this Gospel. While they certainly were not intended to do so, I think they speak eloquently and powerfully to the situation so many believers and nonbelievers find themselves in today. 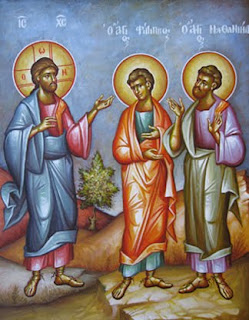 John's Gospel opens with the beautiful Prologue that is so familiar to our ears: "In the beginning was the Word, and the Word was with God, and the Word was God." We are then introduced to John the Baptist, the figure who is sent by God to testify to the Light who has been sent to pierce the darkness of the world.  As Jesus passes John and two of his disciples, he tells them that this Jesus is the Lamb of God. This must have caused enough of a commotion that it prompted Jesus to open his mouth for the first time in the Gospel, leading him to ask, "What are you looking for?" His first words are not an exhortation, they are not a commandment, they are simply a question. The two men whom Jesus addresses respond with their own question, "Where are you staying?" To this, Jesus offers a simple invitation, "Come and see."


Karl Rahner, at the very beginning of his Spirit in the World, remarks (in German): man fragt. In English: man questions. Humans are those beings who are impelled to ask questions, who restlessly seek to understand the world around them. We are driven to make sense of our world, to plumb its depths and to soar into its heights. The world stands as an open question, an invitation, and our questions plunge us deep into relationship with it. The disciples' question that day, "Where are you staying?" is a question responding to a question, "What are you looking for?" Jesus' response isn't a dogmatic statement, it is not a doctrine. It is, rather, an invitation: come and see. And so they do.

Throughout the Gospel, the disciples do more than just "see." They experience with their whole bodies the words and deeds of this Jesus, this Lamb of God. As Jews, their question was not whether or not there was a God...this they presupposed. Their question was, "Is this man telling us the truth about God?" His words are unnerving to many: Nicodemus, a Pharisee, steals away under the cover of night to talk to Jesus, concealed by the darkness lest his confreres learn of his interest in the words of this man. Jesus' disciples see, and hear, and feel how he relates to people, how he heals, how he loves.


They rove about the city and the countryside with Jesus, exploring with him. They pose questions, they challenge Jesus and they are challenged by him. It is a challenge that transforms those who allow him close to their hearts: the man born blind at Siloam didn't know whether Jesus was a sinner, but he did know that although he was once blind, that after an encounter with Jesus he could now see. Mary and Martha experienced this transformation when their brother Lazarus was restored to them. Judas experienced a transformation, too: when John writes of "Satan" entering him, perhaps this tries to capture Judas' effort to catalyze the group, to force Jesus' hand, to make him be the Messiah that Judas, and so many others, expected.

Human reason operates in this same way. It explores, it dissects, it puts things back together. It peers underneath rocks and it strains to see into the depths of the heavens. Questioning all things, it restlessly tries to know, to understand, to master what comes before it. Human reason looks at what is presented to it and queries, "Yes! But is it true?" With this, it embarks again on its quest to understand.

A reasonable person might also say that Jesus' life and ministry was a fiasco, that it ended in utter failure. He was crucified as a seditious rabblerouser and punished with the most shameful execution available to the Romans: crucifixion. He died, accursed on the tree, amidst common thieves, abandoned by all but his mother, the two Marys, and the Beloved Disciple. A reasonable person would conclude that the story had ended, that a life of wonder-working and do-gooding had been for naught, and that another delusional whacko had come, and gone, like so many had before.

This brings us to John 20. It is a question, again, that transforms. Just as Jesus' invitation to "Come and See" marked the beginning of a journey of discipleship, of discovery, of discernment, so now does a question mark a new transition. Mary Magdalene comes to anoint Jesus' body on Easter Sunday, but finds the tomb empty. She approaches a figure whom she takes to be the gardener. He sees that she is weeping and asks, "Woman, why are you weeping? Whom are you seeking?" Mary, not recognizing Jesus, says, "Sir, if you have carried Him away, tell me where you have laid Him and I will take Him away!"

For Mary, it is as though the very center of her universe has fallen away. The lodestar by which she guided her life has been engulfed by the darkness of death and she grieves for this. It is what comes next, however, that is so remarkable: 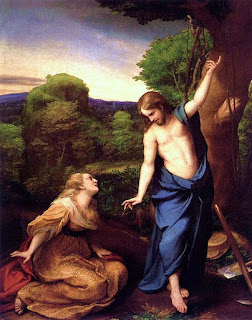 Jesus said to her, "Mary!" She turned, and said to him in Hebrew, "Rabboni!" which means teacher.

In this moment, Mary's world is changed forever: she has experienced the Risen Christ, the Word of God who has reached out to her past death to show her the power of life. No argument, no reasoning, no proof could have prepared Mary for this moment of faith: for it is a gift, irrupting into her world, breaking in upon her to transform her grief into the Joy of Easter.

I mention this for a few reasons. First, remember that the word logos (usually translated as Word) can also mean ledger. As anyone familiar with accounting can tell you, the ledger book is of crucial importance: it is the balance sheet of a company. The health of a company's financial situation is, very often, determined by a careful example of the ledger book. The Resurrection is the ratification of Jesus as the ledger book of God: Jesus reflects, forensically and fully, who God is. Jesus is the truth of God, a God who conquers and vanquishes the fear of death.

Secondly, and more on the topic of faith and reason, I want to insist that faith is not something we argue ourselves into. Faith is a gift. The journey of discipleship parallels the journey of reason: it is a time of exploring, of testing, of questioning, and of formulating belief. For Christian believers, the moment of faith is that experience of the Risen Christ that puts everything into a new frame, that decisively changes one's life and invests the entirety of one's human existence with new meaning. To have faith isn't simply to say that Jesus is the Christ. Faith is the relationship that we grow into, a relationship that makes sense of our beliefs and our lives, and encourages us to be women and men who live for life, for goodness, and for God's Kingdom.

Mary of Magdalene had traversed the route of reason: she had followed, she had believed, and she had been led to tears when she thought her center had given way. It is though her life were swallowed into a terrible silence - awe, grief, terror - that no word can overcome. And yet, a word did overcome the silence: Mary. Reaching out to her beyond space and time, past death and violence, the Risen Christ addressed her by name. Her beliefs were galvanized by the fire of faith and she goes forth, announcing to the disciples, "I have seen the Lord."

Faith is a gift, the offer of relationship. It is not surprising that there is such an allergy to language of faith today: I suspect we are in the death throes of the modern myth of the individual subject, the regnant "I" that needs no one or no thing else. As this image of the subject dies its slow and painful death, there are paroxysms of violence against faith, against religious belief, because it has told us a great many things of what it means to be human: that we are reasoning creatures who are called to make sense of the world but, ultimately, the meaning of the world comes from without, from an Author who is unlike anything we could imagine (God is not a thing, after all). This is a God who has entered into relationship with humans throughout history but who, in a decisive moment, opened up the ledger book to the eyes of history in the form of the Son. For Christians, faith is nothing less than allowing our lives and hearts to be touched by this Son so that we, too, may go out into the world to proclaim to all that we "have seen the Lord."
at August 03, 2010

Hello Ryan,
I feel like a douchebag now but I would really like to ask a professional about the tin whistle and I am aware that you probably dont want this here, but since the last post at your whistle blogg is about 5 months old and I feel desperate!

I started playing the tin whistle a few weeks ago, everything went fine. Then I also found your videos, great!

But my real question is, when doing three notes in a row, like you explain in your second video.
Do one HAVE to tongue them like you explain? I have real big problems with that in faster tunes like "the wild rover" so what I do is that I just blow three times as the melody goes, basically cutting the air flow from stop blowing rather then using my tongue, is this O.k. in whistle playing?

Thanks in advance!
Cheers from Sweden

When doing three notes, you don't have to tongue. The main issue is to break up the three so that they are distinct, otherwise it sounds messy. I would not suggest cutting it using your breath - I can't imagine that sounds very good. Use your tongue or use your fingers (cuts and hits).