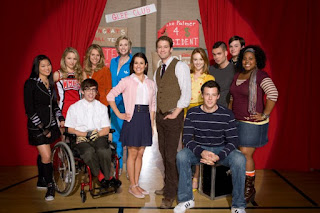 There is a quote - attributed to James Joyce but whose citation I simply cannot find in any text - that "Catholic means 'here comes everybody.'" Whether Joyce said it this clearly or if it is sort of a hybrid phrase (the words "here comes everybody" occur several time in Joyce's Finnegan's Wake) matters little: it is an apt phrase capturing well the plurality of voices that combine to give "Glory to God in the Highest" through the celebration of the Eucharist.


To my mind, one of the better instances of a "Catholic" show is FOX's Glee. Set in Ohio, it is the story of "New Directions," a high school glee club. This may strike some as strange: back in December, TIME magazine writer Nancy Gibbs penned a nice piece entitled "The Gospel of Glee: Is it Anti-Christian". Her article was written in response to a Christian youth minister who thought the show was, indeed, anti-Christian. Gibbs writes:


It is easy to see his point, if you look at the specifics. In his view, Glee portrays Christians as phonies and hypocrites. He observed that the only self-identified Christian is the shiny blond Quinn, cheerleading president of the celibacy club, who is pregnant by one classmate but pretending the father is another. (To make matters more complicated, in a heartbreaking scene, she begs her parents' forgiveness; in righteous fury, they throw her out of the house.) Meanwhile, the glee-club director, Mr. Schuester, is unhappily married to a perky little spider, which makes the adultery subplot involving him look positively charitable. The students lie, they cheat, they steal, they lust, they lace the bake-sale cupcakes with pot in order to give the student body a severe case of the munchies. Nearly all the Ten Commandments get violated at one point or another, while the audience is invited to laugh at people's pain and folly and humiliation.

Gibbs rightly, to my mind, looks beyond the surface of the story and penetrates to the essence of the show:

The point is not whether there is an embedded moral message to be found beneath all the snark and snideness in this show or any other. The point lies in the surprises that jostle us out of our smug little certainties and invite us to weigh what we value, whatever our faith tradition.

Now, I'm going to make a bold statement, one that will need some nuance: the Catholic Church, like the glee club, is made up of losers. Just consider the makeup of "New Directions." You have the preppy cheerleader, the knocked-up former president of the celibacy club, the gay kid, the stud quarterback, the super-talented yet totally fragile diva,  the emo chick, the preppy cheerleaders, the renegade, the  nerdy kid in the wheelchair, and the effervescently chunky black girl. It is a group unlikely to band together except in...well, a band. While some wear the Scarlet L of the Loser more openly than others, each one knows something of what it is to be an outcast, to be unwanted, but finds a home with others who are touched by the same experience.

In this, Catholics have much in common with the members "New Directions." To begin with, we - as all Christians - profess that an itinerant Jewish preacher who was crucified for seditious behavior 2,000 years ago was actually the Son of God, the Word made flesh, that the Creator of the Universe was and is his Abba, his daddy. Without the eyes of faith, we appear to be complete losers, backing a horse that barely got out of the gate. Yet, with the eyes of faith, we profess that scandal of Jesus' execution on the cross was not the end but a comma in the narrative of salvation; that, three days later, the Risen Christ appeared with a message of peace and transforms the hearts and minds of his followers, showing us that he spoke truly of God. It is only with "insiders eyes" that we can appreciate the music of salvation, the melody drawing its listeners in and enabling them to sing of their delivery from sin and death. In other words, it is only by knowing that we are big Losers that we can be a part of the performance of Salvation.

Each week in Glee, the cast of characters has to sort out some issue, confront some obstacle, that would ostensibly scuttle their ability to sing together. Each brings her or his baggage to class and, over the course of an hour, that baggage is unpacked and its contents are taken up into the music making the performance highly distinctive and personal. They are not simply performing music but, rather, performing their lives to music. Hence the the sacramental nature of the show: it takes the elements of the characters' daily lives and transforms them into something more, into vibrant and exciting music. One sees the analogy with the Catholic celebration of the Eucharist: the humbles elements of our daily lives are brought to the altar and are transformed into living and vibrant Bread of Life, the heavenly bread that nourishes us and gives us strength for our journey.

The Doctrine of Original Sin - too often forgotten - reminds us that we will always struggle and that we will often fail. We are not perfect and even when we try our hardest, we will have to confront our own sinfulness and our limitations. Being realistic about our sin, about our being LOSERS, isn't cause for depression. It is what makes us able to gather around the table of the Lord and offer our broken stories to the true Director and give him the opportunity to mend our voices and blend them into a chorus singing "Holy, Holy, Holy Lord..." This is our Catholic Glee: that our fragile and limited voices are still called to contribute to the chorus of praise, that our lives and songs can be taken up into the Life and Song of the Blessed Trinity.
In an ecclesial environment that sometimes fixates on sin, perhaps we might focus for a while on our reason to be glee-ful. In knowing Jesus Christ, I know myself to be a total loser who is still invited to be a part of the band, still invited to lend my off-tune voice to the chorus. I find that when I sing with Him, though, that I suddenly find myself in key, performing the way I most desire to perform. When I look away and begin to compare myself to other singers or my mind wanders, my voice falters...and I turn my embarrassed eyes back to the great Director, apologize, and try again. And again. And again. Hence my glee: I've been invited to be a part of the song of creation, I have found a home, and I can give myself over totally to its performance. My history, my life, my struggles are transformed into the song of salvation that is written by the Father, performed by the Son, and inspired by the Holy Spirit. Recorded on the disc of history, I rejoice that this loser has so much to be joyful about.
at June 06, 2010

Thank you for sharing this reflection on Glee. I never quite looked at the show with those lenses....but...very worth doing, which I shall do from here on out. :)