Update from the Homefront

Without too many weather-related difficulties, I arrived back in Cleveland on Saturday. Within the last 72 hours, my cousin's house has burned down and I've learned that my brother is expecting his second child. My home visits are usually wholly uneventful but, if the last three days is any indication, this could turn into a very exciting visit.
As many of you know, I am a former Weight-Watcher. Then again, considering that I weigh less now than I did in the 5th grade, I reckon I still count as one. Perhaps while I'm home this week I'll look around for some other pictures, but in the meantime let me post this oldie in order to give a sense of how big I was at the age of 12 or so: 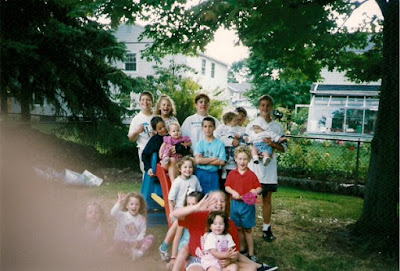 (I'm in the back row, center)
I mention this, first, because I think it's funny to look at old pictures. Painful. Embarrassing. But, in the end, funny.
Second, over the years of blogging, I've often shared with readers my journey into physical fitness. From my initial forays into the YMCA as a novice to the more structured Cross-Fit program that Drew and I have been doing this year, I have made frequent mention of this (literally) physical part of my journey.
One of the amazing features of Cross Fit is that it's incorporation of numerous running exercises - from 200m dashes to 10k runs - has forced me to begin running. Now, as a guy who HATED the idea of running, who refused to run the obligatory 1/2 mile run in high school, the idea of running was initially horrifying. Indeed, back in September I struggled to run even a mile. Just over a week ago, I ran a 10k (about 6 miles) in under an hour. So over the course of four months, I've seen enormous improvement in my cardiovascular health and I've made a new discovery
I really enjoy running.
I mean, I really enjoy it. I like to listen to my iPod, pray, and just be still within myself as I move. I mapped it out and it's just 3.5 miles from Grandma Hagan's house to my parents' house, and since that's just a bit over a 5k, it'll be a good daily run for me.
Anyway, last night I had some spare time, so I went to Kohl's and to Target to do some "Running Shopping." Both stores are having really good sales right now, so I suggest going to Kohl's to buy your running jacket and pants and to Target for shirts. I probably should buy a new pair of shoes, but I'll get those when I return to New York in two weeks.
It is my hope that, if all goes well, I will be able to train over the next few months for the Pittsburgh Marathon on May 3, 2009. I think it would be a fitting capstone, just 15 years later, to the adventure of a high school freshman who refused to run 1/2 mile to now successfully complete 26.2 miles. I can't promise that I'll finish the race, or that I'll even emerge in one piece, but I'm going to give it my best effort.
Before we enter into the New Year, I'll post something on the importance of physical activity for the spiritual life. But I beg your indulgence over the next few months insofar as I expect that I'll want to post many of my running times on my blog. Not only would such a sharing keep me motivated to maintain my training - especially in the cold months of winter - but also it may help to motivate others to take up a task that seems, from a distance, impossible but, with patience and time, is actually doable.
at December 23, 2008

Kudos to you! I was a school-years couch potato (and long into my early years of marriage). I now do yoga, Jazzercise and hiked 275 miles last year on the El Camino de Santiago to the tomb of St. James! Merry Christmas!

Arrrrgh you are not the only evangelist I know for running!!!!! Myself, I was good at avoiding running at high school too. And I would have to admit to being a bit of a couch potato over our winter, but hope to rectify that now I am on summer holidays. But like Teri, I discovered the joys of a long distance walk. From mid-April to early July, I walked from Le Puy in France to Santiago in Spain.
Merry Christmas!
Margaret

Good for you Ryan and best of luck in the training. My husband ran the NYC marathon (his 4th and, he says...last) in November.

Keep moving, Dave has run since it was a way to lose 40 lbs in 1986...he started doing races, and marathons as a way to remind himself of the preciousness of life, in remission from Non-Hodgkins Lymphoma since December 2000. I remember the conversation with the oncologist when he asked if he could run a marathon - he looked Dave and said "Well, yes, but I'm not sure why you would WANT to!"

Best of luck and Happy New Year to you and your family! You are in our prayers here in Youngstown.

P.S. Ironically today is the first day of my running plan at the rec center, hopefully I'll be able to run the entire 5k by spring...